Submitted 12 years 3 weeks ago by WildCoast.Com.

There are arbitrarily 2 types of people on earth: upright dudes, and uptight bastards. Cats and Grinches, or those who grew up reading Dr. Seuss, and those who did not. (Not too sure about the last one, but I speak for myself, and books like The Lorax inspired several generations with a love of reading and a strong bias toward environmental conservation. Thanks to Theodore (Dr. Seuss) Giessel: www.wildcoast.com/lorax)

Most people don't like to think of themselves as uptight bastards, I guess, so they complain less than they should most times. I've come to realize that it's pointless getting worked up over bigots and other assorted idiots, but there are certain things that need to be said, and free speech does appear to be alive and well in Zantsi, <i>even if sometimes the quality of said speech is less than appealing.</i> Mine included.

Actually, I have in the past mentioned our ward councilor's dodgy dealings, but didn't really go into details because of a cowardly fear of repercussions with my state funded employment here. Which rubs precisely on the nub of the problem with employment in the area generally: out here in the lallies the ward councilors  control job allocations. My dystopic viewpoint is blurry, but seems our leaders verge toward authoritarianism and imposing failed communist doctrines on us all; manufacturing dogma and principles based on "democratic centralism" and a "National Democratic Revolution" which is actually code-speak for undermining traditional culture and patriarchal leadership structures while simultaneously creating a disenfranchised proletariat who still won't have rights to their own land.

Sounds like histrionics, I'm sure, but there is no adequate way to convey the abuse of power that we witness, and I've lost my sense of humor.

Nkosinathi Mvunge, the very unpopular, but apparently invulnerable ANC councilor of Ward 23, stirs the trouble pot at Hole in the Wall time and again.

2 Years ago he stopped our project over the Christmas period because he felt that the majority of employees were UDM (United Democratic Movement) supporters. So he arranged a meeting for January and basically insisted that each person declare their political affiliation. Turned out it was pretty balanced, so he magnanimously allowed the project to continue. However, the approximately 40 staff members only received half  salaries that Christmas.

The current issue is not as blatant: Coastal Care is responsible for creating employment and for the cleaning of our beaches; and as an EPWP (Expanded Pulic Works Program) sponsored project under Social Responsibility, Policy and Projects within the Department of Environmental Affairs and Tourism, (which incidentally is in the process of a name change to Water & Environmental Affairs under Jacob Zuma's presidency) they owe our impoverished people here Social Responsibility Projects for several reasons; not the least of which is the fact that the people's land is held in "trust" and they are unable to buy sell or cede their properties. Another is the fact that the regulations governing subsistence fisheries are hellish and draconian. Mussels and other seafoods are a primary protein source for many of the poorest people here, and protein is an absolutely essential part of a growing child's diet. But the bag limit on mussels is only 30 mussels per permit per day. Which is really ludicrous when the reality is that people harvest between 5kg and 10kg on average, regardless of whether government has issued the permits or not. Even more mind boggling is government is actually considering an age restriction where no persons under the age of 18 would be allowed access to <i>their</i> shore and coastal resources.

However, to remain on the rubbish subject, the implementing agency controlling our area, Ikamva, had their contract terminated in about September 2008. 25 people who were the Hole in the Wall cleanup contingent lost their jobs abruptly, and since then we've had no cleanup teams here at Hole in the Wall. The contract was awarded to another company, and they got underway in Coffee Bay in about February this year. According to the project  manager, only 15 positions were created for both Coffee Bay and Hole in the Wall. However the implementers were informed (I wonder by whom?) that they could not consult anyone in the Hole in the Wall region because of danger from the ongoing "political instability."

I've been in intermittent contact with the new implementers to try and get something to happen here. Not only for the sake of aesthetics and hygiene, but also for the local employment opportunities.

In September I was informed by a project manager at the implementing agency that they had seen the ward councilor and he was set to organize the allocation of positions; and they would  be starting at the Hole on the 1st October. Then on the 7'th I received a phone call to say that they hadn't started yet because it had been raining, but they would be starting soon. The following week I got another call from the manager to say that the ward councilor was now claiming insufficient consultation, and they have had to refer everything back to the department for further, interminable, delays.

I can understand the impact of the 7 existing jobs at Coffee Bay which supposedly have to be forfeited to employ people at  Hole in the Wall within the original budget; but the lack of communication and planning, and gaps between contract renewals?

Our councilor's list of accomplishments is becoming too vast to ignore, and he should be promoted to somewhere where he can exercise his deft oratory skills to his full potential. I vote we send him to parliament. In other parts of the country competent mayors and entire councils are removed by demagogues over lack of service delivery, presumably to be replaced with cronies closer to the new cadre deployments; and here we have a deployed cadre, complete with Robben Island credentials, actively destroying livelihoods in an ongoing onslaught by the "Ruling Party" to eradicate any opposition. So no jobs for UDM supporters. Sorry for you. What a fucking mess.

In the 3 and a half years I've been living here, our councilor has also succeeded in stopping the Mussel Rehabilitation and community gardens project in its tracks at Hole in the Wall; causing the loss of 20 jobs plus over a million rands worth of investment in the area.

He's also responsible for causing a near civil riot, when he led the process to give away a majority stake in a priceless tract of land, again at Hole in the Wall, without ever consulting the people to whom the land legally belongs. The foreign financed consortium led by an American tax lawyer with layers of non-profit companies (with the same members) was granted the right to build a 45 room hotel, but instead divided the land into 50 tiny erven, the cheapest of which was available for R690,000. Numerous fraud charges have ensued against the American developers. (www.wildcoast.com/node/96)

Furthermore I've personally seen the minutes from several meetings held at Bumbane "Great Place" - the "court" of our dear Comrade King Buyelekhaya Dalindyebo - wherein there were numerous complaints about the ward councilor's arrogance and heavy handed approach, his lack of delivery, allegations of misappropriation of funds belonging to the Tshezi Community Development Trust. If rumors are to be believed he actually spent a weekend in Mqanduli prison over the trust's funds incident. Many people at many meetings  requested that he be suspended, but it appears that he and the king share a disconcerting bond. Strangely though, perhaps there is some hope for the future.

He also used grant money from foreign donors, some R360,000, to purchase 2 tractors which for the past 3 years have sat idly gathering rust at his home. Though I will attempt impartiality and concede that this year, since our spring rains he has actually been attempting to redeem himself and has been seen plowing some fields (himself) on behalf of the Tshezi tribe/community.

<img alt="" src="/files/images/youthcenter.img_assist_custom-288x216.jpg" style="width: 288px; height: 216px;">He has also, for about 3 years now, completely failed with the community youth center which was badly planned and built, and is already falling apart, on another priceless tract of land just outside Coffee Bay. The center has never been put to any useful purpose. All prospective ideas and comers are turned away; and he is rumored to have commandeered the place for his personal office. He's never actually there. though, so who knows for sure?

Sadly, he probably has been carrying out the mandate of "the party" as a deployed cadre engaged in the NDR. Backed by our Convict King Buyelekhaya, who will have sentencing handed down on 30th November 2009 for the 6 convictions out of the 34 charges he was facing, which ranged from assault, to arson (hut burning), and extortion. The charge of murder was reduced to culpable homicide. Though how ordering the beating of a man (the rumors are less kind, but nonetheless who can gainsay the testimony of witnesses who admit that they will kill, out of fear, at his order) can be seen as culpable homicide, like say accidentally killing someone in self-defence, is beyond my comprehension.

About a week before I heard about his convictions, I had come across the summary judgement document for the trial of the people accused of murdering the "headwoman", Nowinase, whom Cde. Buyelekhaya insisted, over the protests of the majority of local "subjects," be appointed as the successor to the late Mzoxolo (her estranged husband, who incidentally was murdered in cold blood before even being officially appointed as the headman of Mthonjana A/A) as an object lesson in "Equality" and "Democracy" or some or other inimical paradoxes.

Attending community meetings is a cogent peek at the state of the National Democratic Revolution out here in "the sticks." Traditionally, the women sit separately from the men at community meetings. At a recent meeting I attended a few weeks ago, one of the local chiefs (very well loved, respected, and all 'round good guy) boldly defied political correctness and stated quite publicly and unequivocally that, essentially, a woman's place is in the kitchen. Qa!

Here are some rubbish pictures: 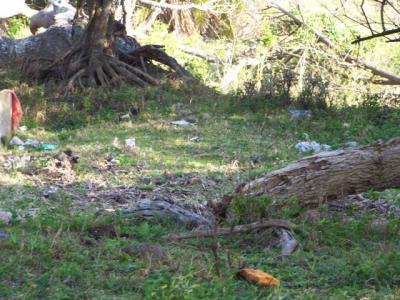 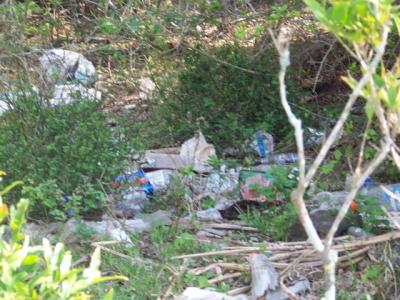 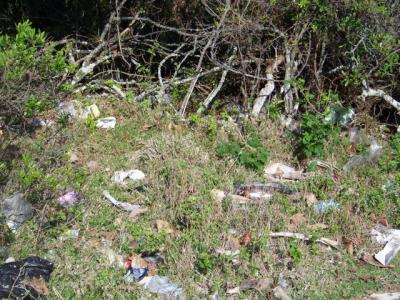 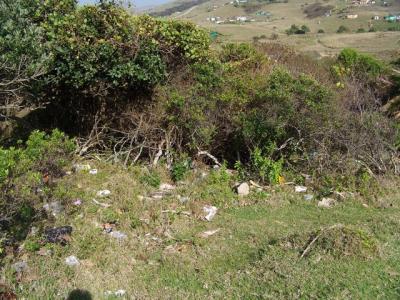 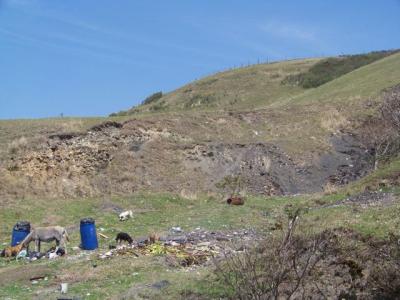 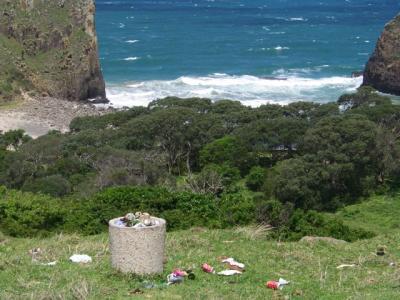 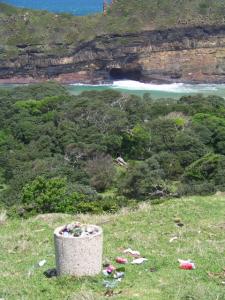 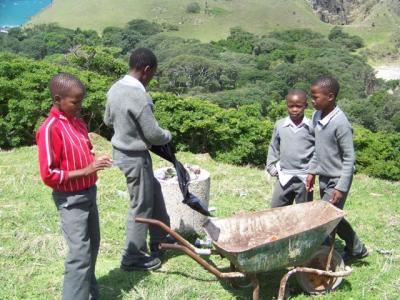 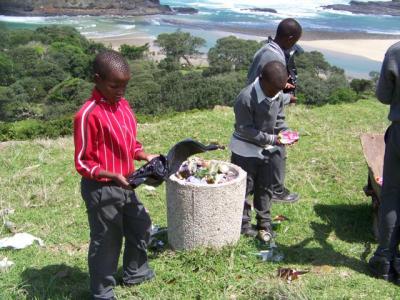 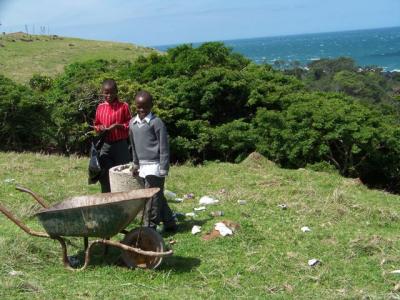 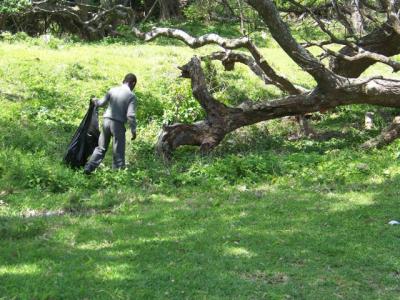 Wow, that was 2 years ago already! And I wasn't completely incoherent with rage. How strange. 7 people were eventually hired to collect the rubbish in and around Hole in the Wall. But just recently there have been 100 people employed for the same thing in Coffee Bay. Because they know that's too many, they work 16 day shifts, 50 people on, and 50 off. That's not much of an issue, one would think; but this is an obvious political hot potato; as our area remains a UDM stronghold (or last bastion, rather) - and the ex ward councilor, Mvunge, was rumored to be trying to prevent the tar road from going ahead between Coffee Bay and Hole in the Wall. He is alleged to be opining that the people don't vote ANC. "How can the government spend money on infrastructure if the people don't vote for the ANC?" *giggle*