From: www.iol.co.za February 8, 2011 By Ingi Salgado For some time, the state has withheld two pieces of information with significance for mining along the Wild Coast of the Eastern Cape. Under much pressure, the government has now released both.

Both documents are shocking, but taken together, they paint a cynical picture of a potentially concerted effort to engineer an economically viable dispensation for mining on the Wild Coast with scant regard for communities and environment.

The first document came in the form of the terms of reference issued by roads agency Sanral to an environmental consultancy for the proposed N2 toll highway, which hugs the coastal sites that prospective miners are eyeing. The terms of reference specifically instruct the consultant to provide “a strong motivation for excluding the R61 and current N2 as options”.

Imagine the outrage if the assessment for a fictional new highway between Durban and Johannesburg was not compared with the impact of upgrading the N3.

That we even have sight of these terms of reference is thanks to Cullinan & Associates, which applied under the Promotion of Access to Information Act. It acts for the Sigidi, Baleni and M

datya communities, the Khimbili Property Association and residents in the amaDiba tribal authority.

The law firm first successfully opposed environmental authorisation for the proposed N2 highway in 2004, sending Sanral back to the drawing board.

Senior director Cormac Cullinan says: “It’s indisputable that if the new road doesn’t go ahead, it will have a major impact on the financial viability of mines... That’s a strong reason why they didn’t want to consider the existing route.”

The toll road appeal is now with the Department of Environmental Affairs. Cullinans alleges Sanral appears to have intended to mislead the minister because the agency initially denied its consultant had been specifically excluded from considering certain alternatives.

The second document to come to light is the nearly year-old report by Congress of Traditional Leaders of SA chief Patekile Holomisa, who led a task team assessing the award of a 2008 mining right to Transworld Energy and Mineral Resources to mine titanium on the Kwanyana block of Xolobeni on the Wild Coast.

The Department of Mineral Resources finally made Holomisa’s report public last week, and it is rather instructive. It points out that Transworld indicated a feasibility study would be carried out “as soon as the mining right is formally granted” – whereas the law requires proof that the mineral can be mined optimally. The report asks whether Transworld was allowed to dictate the pro

cessing of the application.

It also points out the mining right was granted without an environmental impact assessment, environmental management plan or further attention given to any of the department’s own stated requirements.

There was no study of the benefits of mining versus ecotourism and issues raised by the Department of Environmental Affairs were not addressed. The Department of Mineral Resources opted to reconvene the task team, which will hold hearings in Durban this month.

There is a third leg to the saga, a legal wrangle over the Commission for Traditional Leadership’s decision to dislodge amaPondo King Mpondombini Sigcau from the throne. Webber Wentzel says “a gross injustice to (our) clients appears to have been done, which cannot go unchallenged”.

Is it a coincidence that the deposed royals oppose both the Xolobeni mining and the N2 toll road?

It certainly seems that the macro-economic plan is to road freight the un-beneficiated raw minerals from Xolobeni to East London for smelting, but has anyone considered the road congestion and negative impact on every other industry? Why don't they just build a railroad? 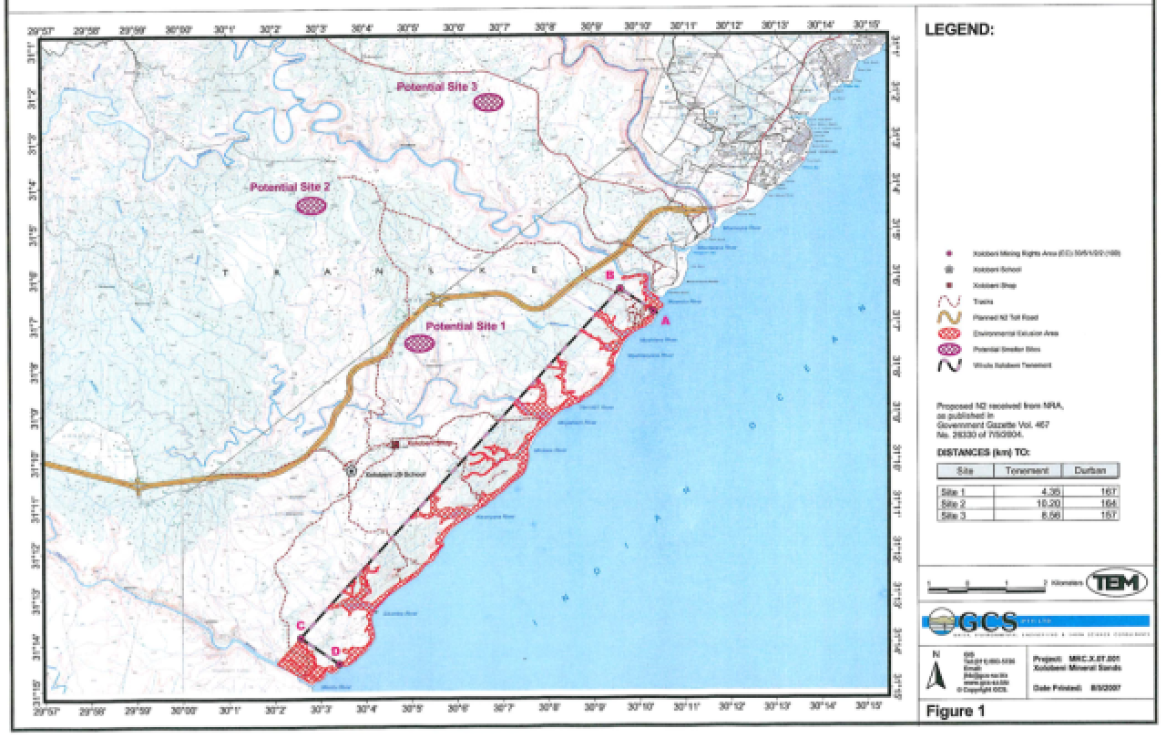