Submitted 6 years 8 months ago by WildCoast.Com.

Lawrence estimated that moving, rebuilding and demolishing would cost R400000, which would wipe out half their five-year investment.

Munrow did not appear at his cottage yesterday, but sent the Dispatch text messages in which he claimed his appeal to save his cottage was still before “the minister” based on the historic construction of the cottage in the 1950s by missionaries at Zithulele who ran a trading station which came with the right to build the Lubanzi cottage.

He said no cottages in the row were given PTOs because of the “laziness of the headman”.

He said he had proof of attempts made to try and get one.

He was shocked when the Green Scorpions called him yesterday and told him to come and get his  belongings before  the demolition.

But officials demolishing his house denied all knowledge of his appeal and said he had ignored the process.

Mzondeleli told the media and villagers that all legal steps in the law, among them notices and appeals, had been followed and that the owners had either failed to comply or had not responded.

But Ndawo said they were not happy with Mzondeleli’s address as all they had heard him saying was that this was a day for action, not talking.

The first structure to be bashed down contained a colourful painting by three artists.

One of them, Capetonian Danielle West, said one of the enormous portraits was spray-painted by underground artist Mookie in honour of his father, who was a senior Scorpion in the 1990s.

Yandisa Somgidi, a professional lifeguard in Lubanzi, said he had asked a Dedeat official last year if they could use one of the houses as a clubhouse, but was turned down.

Officials stressed they did not want any precedent set in which some structures were allowed to survive.

De Villiers also dismissed claims from villagers that they had not been sufficiently consulted, saying an exhaustive process had been followed with traditional leaders over years to get to the point of demolition.

Villager Noluntu Kayisa, who works at Wild Lubanzi, said her  home fell inside the yellow line marking out the coastal conservation area.

She said: “I don’t like this. What will happen to my house?”

By mid-afternoon the neat row of ageing but charming cottages was reduced to a pile of smoking hulks.

Their owners are apparently holding out for their appeals to succeed, but officials would not release their names. 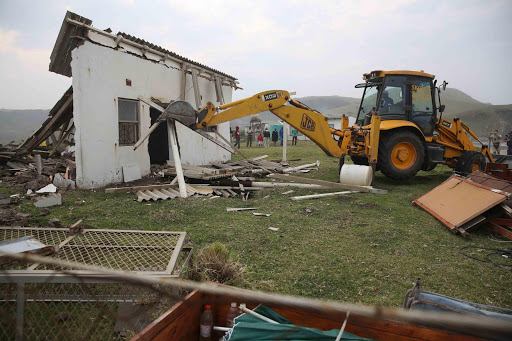 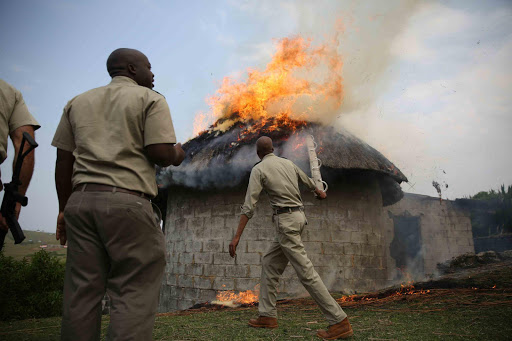 Shocked and dismayed, Lubanzi villagers watched as officials from the Eastern Cape’s Green Scorpions systematically set fire to four empty, illegal, thatched cottages. One “whomp” at a time, they caved in  before television cameras. 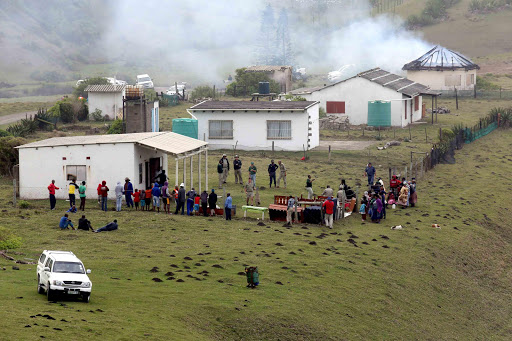 TIME’S UP: One of the five structures in the village of Lubanzi which was demolished yesterday Picture: MARK ANDREWS

The team was led by director Div de Villiers, of the Department of Economic Development, Environmental Affairs and Tourism (Dedeat), and national director of oceans and coast enforcement Dlulane Mzondeleli.

A fifth cottage, owned by Mthatha Backpacker operator Angus Munrow, was first emptied of its contents and then structurally damaged by officials pounding the walls with a sledgehammer.

This was the first enforcement in South Africa of the Integrated Coastal Management Act, which also brings into effect a new coastal management plan.

Together with the Wild Coast spatial development plan, it  seeks to remove all illegal and unsafe structures within a kilometre of the shoreline, said De Villiers.

The successful, rustic, 38-bed, hiking-focused Wild Lubanzi Backpackers and 14 homesteads have found themselves inside the coastal conservation areas depicted by a yellow line drawn on plans.

They face removal based on whether they had historic permission to occupy (PTO),  or because they are unsafe structures.

Officials are adamant that the law contains a fair administrative process, which they say they have followed to the letter.

But Lubanzi Community Committee (LCC) head Michael Ndawo and the owners of Wild Lubanzi – Aidan Lawrence  and his wife Rachel Heirin,  who is seven months pregnant  – said the consultation process had been inadequate and people were still not properly informed about why they were losing the holiday jobs they got from the holiday cottage owners.

Lawrence said the community owned 50% of the shares in the backpacker business, of which 10% was owned by Ndawo.

A 100m “intensified zone” line runs through the backpackers which is perched above the ocean looking over Lubanzi.

Literally hundreds of buildings are erected within the CCA every year, yet the Green Scorpions do nothing about them. Govt has not issued new PTOs since 1996, but cottages built without PTOs, even when they have the full support of the local community and provide jobs, are needlessly destroyed. Well done Div.