Submitted 7 years 6 months ago by WildCoast.Com.

It's kind of weird that when I post the most arbitrary personal shit: like a sprain injury - I get hundreds of hits a day. (780 in 2 days, and counting.)

When I post something I'm actually interested in, and try to draw a subtle correlation; like the noctilucent clouds that accompanied SpaceX 9 Falcon's launch (at the same time, more or less, as the X-Class solar flare and earth projected CME occurred) .... in just on 2 months that got 105 hits. (Weird, because the reported cause and correlation just make no sense.)

No matter. I'm more than happy to get the weird, arb hits. And I've got something (a lot of things, actually) on my mind.

It's just a waste of time and effort arguing SA land tenure - or American foreign policy - with people that just won't change their minds.

I make no claims to any intellect or great knowledge. I know what I know. And I'm prepared to debate - to great extent - on the issues as I see them. But just to lose that effort in a flowing stream is such a frustrating waste of time.

Truth is, there are only 2 people I miss from facebook. One is a social lawyer who was heavily involved in the Xolobeni case. And other matters of social justice. And the other just a photographer/writer who is the most astute commentator on AFP, Syria, Ukraine, etc.

Anyway. My life here is brief and beautiful. It's a privilege to live where I do.

You won't believe what it cost me, but I gained a new best friend in December that year.

Chris. Short for Crystal.... Haha. My niece Paula named him.

My mother acquired him, for some reason, after she was diagnosed with cancer in mid 2000.

He was right. She passed away on the 19'th of December 2000. 2 years exactly to the day after Gran died. Funny thing (coincidence? I don't really believe in coincidences) .... they were born on the same day, too. 26'th November.

Anyway. Chris, who's name for some reason became 'Fish' to me - became my constant companion and best friend. When he lost an eye, he became 'Fsh'.

There are some pics of him on the site. More to follow if/when I get the inclination.

We only had about 7 years together. And man, I miss him so much.

Balls of fucking titanium! (But that's another story) Such integrity and honesty. And LIFE! He took me for walks every day. Never a lapdog, or pet. I miss him so much. 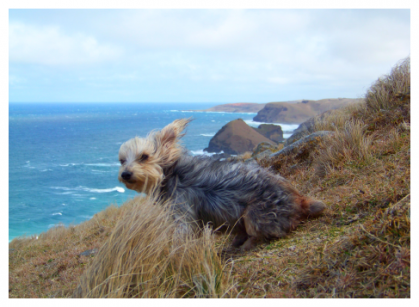