Submitted 11 years 10 months ago by WildCoast.Com. 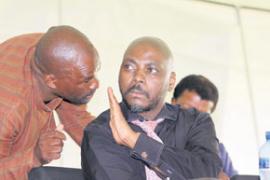 PRESIDENT Jacob Zuma was called on yesterday to apologise to the AbaThembu nation and order the State to pay the tribe R80billion for allowing the humiliation of their monarch.

And the State was also instructed to pay R900million – or else! – to the family of King Buyelekhaya Dalindyebo, who was sentenced to 15 years in prison after being convicted of serious crimes last week.

If the demands were rejected the AbaThembu nation would secede from South Africa and form its own independent State.

The bizarre demands and threats came in a discussion document which was revealed during the launch of “The Justice for Dalindyebo Campaign” at the king’s Bumbane Great Place.

Votani Majola, convener of The King Dalindyebo Justice Task Team (KDJTT), which heads the campaign, made the following demands with five-day deadlines: