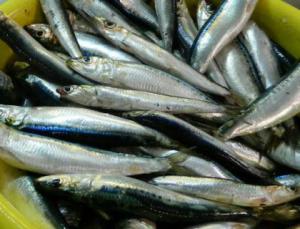 Sardines are small pelagic fish of the order Clupeiformes found in the upper layers (0 - 200m depth) of the ocean. Sardines are particularly abundant in upwelling regions because of high nutrient production that stimulates phytoplankton and zooplankton growth, which is the food source of these and other small pelagic fish. They are short–lived, fast growing and have high levels of natural mortality (large scale death) (Barange et al., 2009). Sardines occur in temperatures of 13-22°C around the South African coast, can live up to six or eight years (van der Lingen et al., 2006), and can reach close to 25 cm standard length which is measured from the tip of the head to just before the tail/caudal fin (van der Lingen et al., 2009; Hampton, 2014). Sardines are the main target of the country’s small pelagic fishery which has been in operation since the 1940s (Crawford et al., 1987). The term sardine was first used in English during the early 15th century and may come from the Mediterranean island of Sardinia, where sardines were once abundant.

How to recognise sardine

Getting around
The cylindrical body form with fins of the sardine enables it to swim easily up and down the water column. Sardines are migratory species; they migrate to specialized grounds for spawning and migrate back to their usual grounds after spawning (van der Lingen et al. 2010). Spawning is the process of releasing gametes (sperm and/or egg) into the water column.

Communicating
Sardines are schooling fish found swimming together in large groups. They don’t have a certain mode of communication except that vibration in the water column can alert the other fish about what is happening during their schooling activ 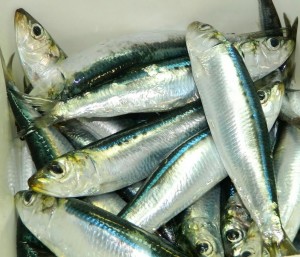 Distribution
Southern African distribution of Sardinops sagax extends from southern Angola (14°S and 10°E) off the west coast of South Africa, to north of Durban off the east coast of South Africa (Beckley and van der Lingen, 1999). Sardinops sagax is only found off the east coast during the ‘sardine run’, which is a migration where sardines leave the Agulhas Bank and move to the east coast in late May/early June every year (van der Lingen et al., 2010a; 2010b). Sardinops is found distributed in five upwelling regions globally; the Kuroshio-Oyashio current system off Japan, California current system, Humboldt Current system from the south of Peru to the north of Chile, European Bay of Cadiz to the North Sea and western Baltic Sea, and the Benguela current system off the west coast of Southern Africa (Checkley et al., 2009).

Sardines usually occupy the sea water depth of up to 200m. Sardines undergo diurnal vertical migration which is a phenomenon where fish migrate to the surface water at dusk and move to the deeper ocean at dawn (Giannoulaki et al., 1999), driven by the presence of light.

Food
Sardines are planktivores that feed on both phytoplankton and zooplankton but derive most of their dietary input from small zooplankton such as copepods (van der Lingen, 2002). They filter-feed by swimming slowly with their mouths wide open and operculae flared and use their finely-meshed gill rakers to strain their food from the water.

There is a possibility of a third S. sagax stock occurring off the east coast of KZN during the annual winter migration of S. sagax (van der Lingen et al., 2010a). Sardinops sagax eggs occur in winter during the sardine run off Park Rynie (70 km south of Durban) (Connell, 2010; Fréon, et al., 2010), but are not found there during the remainder of the year (Connell, 2010). 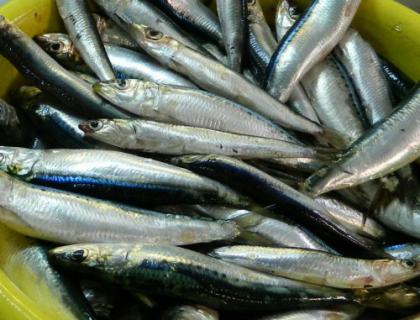 Sardines are found throughout the entire coast of Southern Africa. They tend to occur in large schools. There is evidence of three discrete sardine stocks in South Africa; western, southern and the eastern stock with different morphological characteristics.  The western and southern stocks are separated by Cape Agulhas; the western stock occurs from the west of Cape Agulhas, and the southern stock from the east of Cape Agulhas. The third stock occurs off the east coast of KZN during the annual winter migration of S. sagax (van der Lingen et al., 2010a).

Friends and Foes
Sardinops sagax are commercially harvested in upwelling and other regions around the globe and together with other small pelagic fish such as anchovy (Engraulis spp.) and round herring (Etrumeus spp.) account for around ¼ of the world’s marine fish catch (Barange et al., 2009; Checkley et al., 2009).  Sardines are the main prey of a variety of predators including other fish such as yellowtail, hakes, tuna, and sharks; marine mammals such as seals, dolphins and whales; and seabirds such as African penguin and Cape gannet (Beckley and van der Lingen, 1999).

Smart Strategies
Sardines use diurnal migration as protection from predators. Sardines scatter as they migrate to the surface and concentrate to form shoals when they descend to the ocean depth. Also, sardines have a light colored abdomen and dark colored back which acts as camouflage from predators. When sardines are approached by predators, they gather together to form what is called a swarming. Swarming helps to confuse predators into thinking that the prey is bigger and they struggle with targeting one fish from the group. There are better chances of survival when sardines swim in groups than as individuals.

People
Sardines form part of a big fishery and are important to the country for several reasons. The purse-seine fishery in which they are caught is South Africa’s largest fishery in terms of landed mass (the amount and the weight of fish caught) and second only to the hake fishery in terms of value (Barange et al., 2009).  This fishery employs a large workforce in fishing and related industries. Also, pelagic fish are an important and high-quality source of protein. They are used as food source for humans and pets, and as bait (Beckley and van der Lingen, 1999; van der Lingen, 2002).

Conservation status and what the future holds

In South Africa, the fishery for S. sagax has been initially managed assuming a single stock using an operational management procedure (OMP) to set total allowable catch levels (TACs). Recently, there has been evidence for the occurrence of three sardine stocks (Coetzee et al., 2008; van der Lingen et al., 2015; Weston et al., 2015) which has management implications. The current fishing pressure and stock status of sardine is assessed as being optimal (DAFF, 2014); meaning that current rates of fishingare sustainable.

Sardines have been exploited by purse-seine fisheries in the Benguela system off Namibia and South Africa (Lluch-Belda et al., 1989) for several decades. Catches of S. sagax by the purse-seine fishery have fluctuated between 15 000 tonnes and 400 000 tonnes per annum with periods of high catches followed by rapid declines. In 2012 the S. sagax catch was about 98 000 tonnes which was the highest catch since 2007. There was a reduction of the total allowable catch (TAC) in 2013 to 90 000 tonnes which is the minimum allowed catch under the current operational management procedure (OMP) used to manage this resource (DAFF, 2014).

RELATIVES
Within the Clupeiformes, the suborder Clupeoidei consists of 397 species which are classified into five families (Lavoué et al., 2013), namely the Clupeidae with 55 genera and 205 species, the Engraulidae with 145 species from 17 genera, the Pristigateridae with nine genera and 38 species, the Sundasalangidae with one genus consisting of 7 species and the Chirocentridae with two species from one genus. The Clupeidae is divided further into four subfamilies, namely the Alosinae, Clupeinae, Ehiravine and Dorosomatinae. A temperate sub-family Alosinae is divided into four genera; Sardinops and Sardina are more closely related than are Alosa and Brevoortia. Sardinops sagax is one of 13 species in the family Clupeidae occurring in Southern African waters (Beckley and van der Lingen, 1999).

where are the sardines now?

<p>Can anyone tell me where the sardine shole&nbsp;is at present?&nbsp;</p>

Two of my images are being

Two of my images are being used on this page without my permission nor with my credit. Please contact me on my email to discuss. 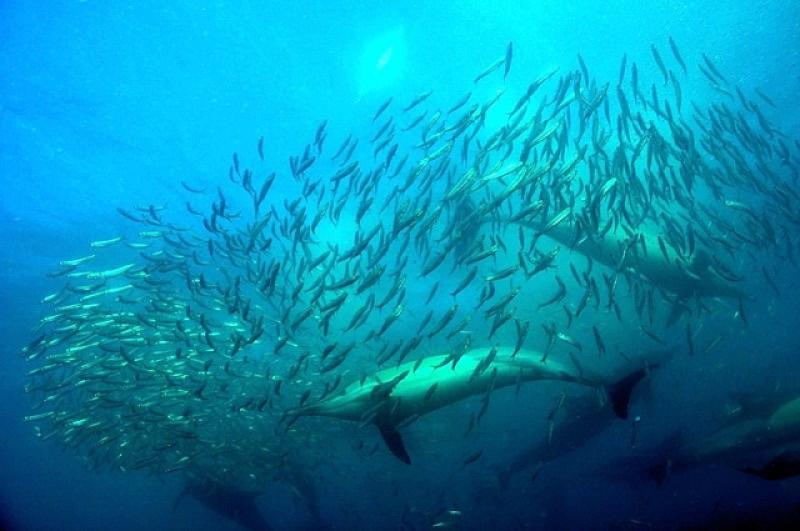