Submitted 13 years 4 months ago by WildCoast.Com.

The unique morphology, distribution, karyotype and molecular fingerprint distinguish it from all other pendulous-flowered species in the genus.

Distribution
This taxon is endemic to the Pondoland Centre of endemism, with a distribution from Port St. Johns in the south to the Mzimkulu River in the north. Habitat Restricted to Msikaba Formation sandstone, the habitat is characterised by rugged plateaus (100-500 m above sea level) that are deeply dissected by narrow river gorges, within which occur isolated forest patches, containing mixed tropical and Afromontane elements.

Mean annual rainfall varies from 1 000-1 200 mm and occurs mainly in the summer months. The mean annual temperature along the coast is around 20°C. The soils are usually sandy, acidic, highly leached and often shallow.

It occurs commonly under natural forest cover, in or near water in a marshy environment, with some populations growing in seepage areas on or below cliffs in humus‑rich soils. In swampy places, plants occurred in big clumps with individuals as high as 1.8 m with buttress roots, but those in dryer, rocky habitats are noticeably 'stockier'.

Plant size
The biggest of the clivias, this species grows up to 1.8 metres high, with an aerial stem of up to 450 mm with buttress roots when growing in swampy conditions.

Leaves
The smooth soft leaves are rounded at the tip, and some have a faint median stripe. The leaves are 300-1 200 mm long and 30-90 mm wide, with a non-pigmented leaf base.

Berries
The round red berries which contain up to 4 seeds ripen the following winter (~ 12 months). www.cliviasociety.org/clivia-genus/clivia-robusta/

Specimens of Clivia were

Specimens of Clivia were originally gathered by British explorers William Burchell and John Bowie in 1815 and 1820. Clivia nobilis became the first named species when in 1828 the Kew botanist John Lindley named it in honor of Lady Charlotte Florentia Clive, Duchess of Northumberland, who was for a time the governess of the future Queen Victoria.

All photos on the site,

All photos on the site, unless specifically stated under copyright, are licensed under Creative Commons Attribution-Share Alike 2.5. Help yourself. : ) 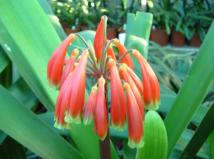