Submitted 12 years 2 months ago by WildCoast.Com. 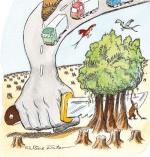 A recent parliamentary response to questions about the N2 Toll Road, posed to the Minister of Transport, shows the government has a deeply flawed understanding of the broader issues surrounding the N2 Toll road debacle. The Minister’s response suggests a government that is stuck in an inflexible time warp, basing its decisions on outdated, vastly flawed and unsustainable development projects that were conceived of in the early 90's, under scenarios vastly different from the situation that prevails today.

In reply to questions of whether the N2 was being planned as part of a broader spatial development plan, and how it would benefit the broader development objectives of the area, the Minister responded that the N2 was planned as part of the Wild Coast Spatial Development Initiative (WCSDI) intended to ‘unlock the development potential of the Eastern Cape’. The Minister mentions the establishment of the Pondoland Park as being a key component of the WCSDI, cites the road as being a key catalyst for the development of the area, and says benefits include positive economic impacts from tourism, retailers, service providers, jobs and investments from construction.

In terms of mitigations for negative impacts, the Minister agrees that the road will bring ‘disruption to the status quo’, but suggests that the preservation of the environment is a secondary consideration to the improved quality of life the road will supposedly bring. He also argues that it is only the 75Km (13%) of the Greenfields section that runs through the Pondoland Centre of Endemism (PCE) that is contentious, and that the narrow margins of the road reserve mean it is only 16% of the natural environment of the PCE that will be disturbed.

It sounds good and well, but a critical look shows these arguments to be misleading, highly contradictory, and totally oblivious to the realities at play in the region. The Ministers response implies that the Pondoland Park is central to the implementation of the WCSDI.

The concept of a Pondoland Park is also mentioned in the final EIR for the N2 Toll road as a key mitigation measure against acknowledged environmentally unsustainable impacts of the proposed N2 on the PCE, as a result of high ecological impacts. But the idea of a formally declared Pondoland Park, as it was presented to Wild Coast Communities by former Minister of the Environment and Tourism Minister van Schalkwyk, was rejected out of hand by local communities who reside on the land, who see it as nothing more than an attempt at a land grab of communal land by government authorities.

If the Pondoland Park is seen as key to carrying out the plans of the WCSDI, and of being central to mitigation measures against the high ecological impacts of the proposed N2, then how does government intend to proceed with a Park if this idea has been rejected by local communities, and consequently is no longer considered a viable option by the Department of Environment? If the Park is no longer an option, then how will the adverse impacts of the ‘Greenfields’ section of the N2 be mitigated? One cannot talk development in the Wild Coast area without also considering the spectre of the Xolobeni mining proposal.

If the government is seriously considering tourism as key to unlocking the development potential of the region, as the Minister suggests, then how can government be simultaneously entertaining the idea of mining in the very same area where they are talking about a Pondoland Park and increasing tourism?

- If ‘disturbance’ of the area is going to be confined solely to the road surface and road reserve, as the Minister suggests, then how is the road going to bring all the supposed secondary benefits and the ‘opening up for development’ of the region that the Minister sings lyrical about?

- If the road is intended to be a catalyst for secondary and ribbon development, then to say that ‘disturbance’ to the PCE will be limited to the 16% directly affected by the road surface and road reserve is a highly deceptive statement, to say the least.

The Minister misses the point completely when he dismisses the issues around the “Greenfields” section as being insignificant when viewed from the perspective of the road as a whole. This ‘Greenfields’ section is the only entirely new section of the road being proposed, with the rest of the road being an upgrade of existing road surface.

It is because of the social and environmental inappropriateness and unsustainability of the new ‘Greenfields’ section, and the extra taxes that will be imposed on the public in the form of tolls to pay for the road, that the proposed N2 has caused such a debacle and has been so opposed by the public.

The Minister presents his arguments as if the Toll road, and the supposed benefits it will bring, is the only option by which to bring ‘development’ to the region. The Minister overlooks the fact that there are many other options of ‘development’ that will bring benefits to the region without the high, and unsustainable, cost of human and environmental disruption that the proposed N2 will bring to the PCE.

These include upgrading existing local roads, and re-planning so that the proposed ‘Greenfields’ section of the N2 runs outside of the PCE. A road alone will not bring 'development'. Only investment in people brings 'development'. This requires an integrated approach that goes far beyond road building. It requires an investment in education, skills development, health improvement, democratic structures that meaningfully engage with local communities and public participation at a grass roots level, environmental conservation and restoration of degraded environments, and overcoming the gross mismanagement that is rife in local government and municipal structures and which has played a large role in the perpetuation of non-service delivery in the region.

Far from revealing that the N2 proposal is part of a well thought out Spatial Development Plan for the Wild Coast Region, the Ministers response highlights the deep and inconsistent fatal flaws inherent in the N2 proposal. Sustainable development depends upon conserving the structures of the environment upon which all life, including all human life, depends.

If the government is truly serious about addressing issues of poverty alleviation and inequality in the rural areas of Eastern Cape, while paying more than lip service to environmental considerations, then they need to go back to the drawing board and rethink their concepts of sustainability and development, instead of trying to perpetuate a flawed and unsustainable development model based on inappropriate models of development thinking that were fashionable in the 90s’. ENDS Val Payn On Behalf of Sustaining the Wild Coast (SWC) swcoastval

Is there a petition going?

Is there a petition going?

Sign the petition against the unsuitable development, and destruction of the Pondoland Center of Endemism at: www.wildcoast.co.za/ict4d/petition

I dont see why they dont fix the existing roads, instead of building a highway and not reparing the exisiting roads. Keep the wild coast wild, it's better that way!