Submitted 12 years 3 months ago by WildCoast.Com. 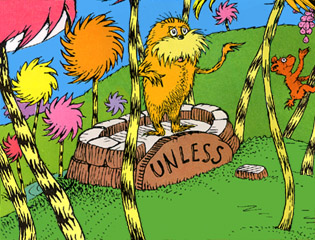 The Lorax was written and illustrated by Theodore (Dr. Seuss) Giesel in 1971 as a colorful childrens book, with a biting satirical message - for adults and children alike - about man's tendency to invade and destroy his natural environment. It is a pointed commentary on the expansion of the logging industry in the early 70s that is even more relevant today than it was 38 years ago when he created it.

The cute, furry Lorax is believed to be a representation of the great northern owl of the Pacific Northwest, which makes its home in the coastal redwoods and Douglas fir trees.

Read http://chokingplanet.wordpress.com/2009/02/26/dr-seuss-had-it-right/ about the controversy The Lorax stirred up in America.

“Aren’t you ashamed?” Asks the Lorax. “The things you are doing are completely ungood”

“But if I didn’t do it, then someone else would,” says the Once-ler. 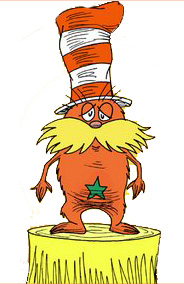 I am the Lorax! I speak for the trees,
Which you seem to be chopping down as fast as you please;
But I also speak for the brown Barbaloots,
Who frolicked and played in their Barbaloot suits,
Happily eating Truffula fruits.
Now, since you've chopped the trees to the ground
There's not enough Truffula fruit to go 'round!
And my poor Barbaloots are all feeling the crummies
Because they have gas, and no food, in their tummies.

Unless someone like you cares a whole awful lot,
nothing is going to get better. It's not.

Catch! calls the Once-ler.
He lets something fall.
It's a Truffula Seed.
It's the last one of all!
You're in charge of the last of the Truffula Seeds.
And Truffula Trees are what everyone needs.
Plant a new Truffula. Treat it with care.
Give it clean water. And feed it fresh air.
Grow a forest. Protect it from axes that hack.
Then the Lorax
and all of his friends
may come back.

Now all that was left 'neath the bad-smelling sky
was my big empty factory...
the Lorax...
and I.
The Lorax said nothing
just gave me a glance. Just gave me a very sad, sad backward glance.
He lifted himself by the seat of his pants and i'll never forget the grim look on his face
as he hoisted himself and took leave of this place through a hole in the smog without
leaving a trace
and all that the Lorax left here in this mess was a small pile of rocks with one word.
UNLESS 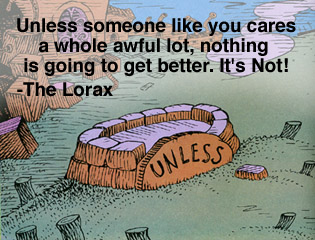