Submitted 2 years 10 months ago by WildCoast.Com.
Final voyage of the Oceanos

On 3 August 1991, the Oceanos – initially delayed due to a bomb threat – set out from East London, South Africa and headed for Durban. Captain Yiannis Avranas (born ca. 1940) had been an officer for twenty years and a seaman for thirty. Oceanos headed into 40-knot winds and 9 m (30 ft) swells. Usually, there would have been a "sail-away" party on deck with the ship's musicians and British entertainers Moss and Tracy Hills. However, due to the rough seas, this was held inside in the Four Seasons lounge; most passengers chose to stay in their cabins.

The storm worsened as the evening progressed and when the first sitting of dinner was served, the waiters could hardly carry the trays of food without dropping something. Eventually the Oceanos was rolling about from side to side so badly that crockery and cutlery began sliding off the tables and potted plants fell over.

While trying to make up time due to the earlier delay, the Oceanos encountered rough seas. Earlier repairs to the waste disposal system had not been completed, which meant that a vital ventilation pipe which ran through the watertight aft bulkhead and the non-return valves were not replaced. It's believed that after a series of freak waves slamming against the ship the pipe’s shell plating had burst open spilling seawater and began filling the compartment. At about 9:30 pm, a muffled explosion was heard and the Oceanos lost power. The ship started taking on water, rapidly flooding the engine room. By the next morning rescuers found the Oceanos adrift just off Coffee Bay, listing badly to its starboard side. 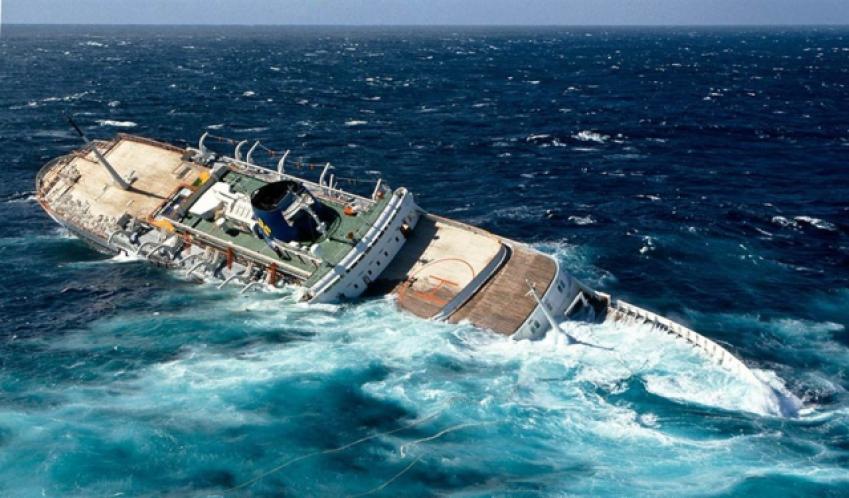 The following day at approximately 15:30 local time, the Oceanos rolled over onto her side and sank by the bow at 32.12093°S 29.12029°E. The last fifteen minutes of her sinking was captured on video and broadcast by ABC News.

Captain Avranas and his crew were criticized for leaving hundreds of passengers behind with no one other than the ship's onboard entertainers to help them evacuate. Avranas received extensive media coverage as an example of unprofessional behaviour whilst in command. Avranas tried to defend his actions by claiming that he left the ship first to arrange for a rescue effort, and then supervised the rescue from a helicopter. He justified his actions saying the "ship was in darkness and the batteries on the crew's walkie-talkies had died, meaning that he had no communications with his crew or with other rescue craft". Avranas was quoted as saying, "When I order abandon the ship, it doesn't matter what time I leave. Abandon is for everybody. If some people like to stay, they can stay." The captain and some of the crew were convicted of negligence by a Greek board of inquiry for fleeing the ship without helping the passengers.

Alevizos Klaudatos, head of Epirotiki Lines, was quoted as saying: "Of course the crew members assigned to the boats have to enter first in order to assist the embarkation of the passengers ... as regards the captain abandoning the vessel, this is untrue and he has maintained his position throughout in assisting the rescue in the most effective way 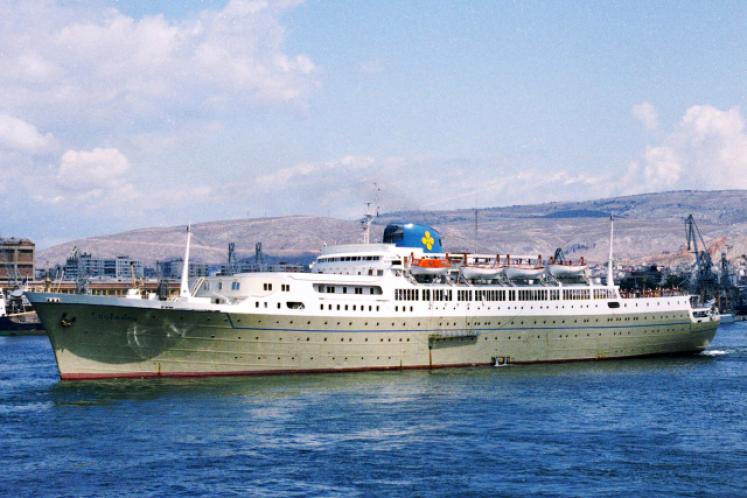 As no alarm or announcement had been given that the ship was in trouble, several passengers went to the bridge to look for the crew, only to find it unmanned. Moss Hills then used the radio phone to broadcast a Mayday distress call until a ship answered. Of the sixteen rescue helicopters that came out to the ship, thirteen were South African Defence Force (SADF) Pumas, nine of which hoisted 225 passengers off the deck. They were assisted by the lifeboats of the Dutch container ship Nedlloyd Mauritius, which had responded to the distress call.

All 571 people on board were saved. Hills organized the orderly evacuation of passengers by the helicopters and is generally acknowledged as the leading hero of the event. Hills and fellow entertainer Julian Butler directed the efforts of the entertainment staff, which included Hills' wife Tracy and Robin Boltman, to assist the passengers. According to Boltman, "later in the morning, the Captain even contacted me from shore to ask how things were going."Butler, Moss Hills and Tracy Hills were among the last five to be rescued.

After many officers and crew abandoned ship, women and children were given priority when loading the lifeboats by cruise director Lorraine Betts. Later, after the ship's list became so severe that the remaining lifeboats were rendered useless, the remaining passengers had to be airlifted onto SADF helicopters by means of a safety harness. Betts again insisted that women and children be rescued first. 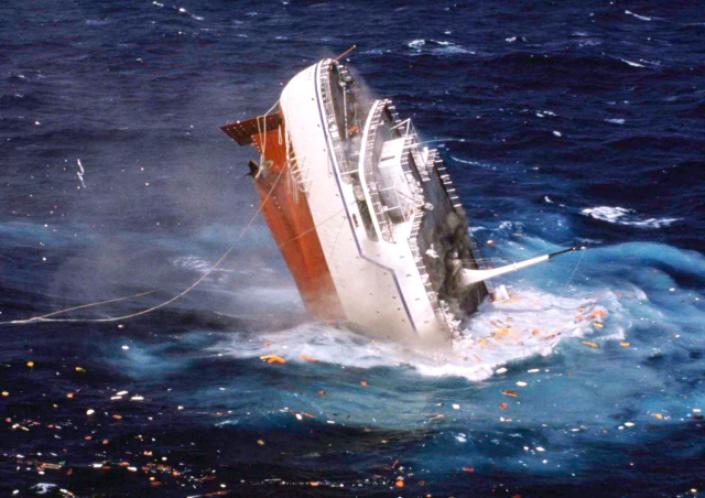 The MTS Oceanos was a french-built, Greek-owned Cruise ship that operated from Piraeus. It is infamous for its sinking in 1991 off the coast of South Africa.

The ship was reported to be in very poor condition when it set sail for Durban on its final voyage, and was in a state of neglect, with loose hull plates, check valves stripped for repair parts after a recent trip, and a 10 cm (4 in) hole in the “watertight” bulkhead between the generator and sewage tank.

Usually, there would have been a “sail-away” party on deck with musicians and British entertainers Moss Hills and Tracy Hills.

However, due to the rough sea conditions, this was held inside in the Four Seasons lounge; most passengers chose to stay in their cabins.

The storm worsened as the evening progressed and when the first sitting of dinner was served, the waiters could hardly carry the trays of food without dropping something.

Eventually, the ship was rolling about from side to side so badly that crockery and cutlery began sliding off the tables and potted plants were falling over.

At approximately 21:30 UTC+2, while off the Wild Coast of the Transkei, a muffled explosion was heard and the Oceanos lost her power following a leak in the engine room’s sea chest.

The ship’s chief engineer reported to Captain Yiannis Avranas that water was entering the hull and flooding the generator room.

The generators were shut down because the rising water would have short circuited them. The ship was left adrift.

The water steadily rose, flowing through the 10 cm (3.9 in) hole in the bulkhead and into the sewage waste disposal tank. Without check valves in the holding tank, the water coursed through the main drainage pipes and rose through the ship, spilling out of showers, toilets, and waste disposal units.

Realizing the fate of the ship, the crew fled in panic, neglecting the standard procedure of closing the lower deck portholes. No alarm was raised.

Passengers remained ignorant of the events taking place until they witnessed the first signs of flooding in the lower decks.

At this stage, eyewitness accounts reveal that many of the crew, including Captain Avranas, were already packed and ready to depart, seemingly unconcerned with the safety of the passengers.

Nearby vessels responded to the ship’s SOS and were the first to provide assistance.

The South African Navy along with the South African Air Force launched a seven-hour mission in which 16 helicopters were used to airlift the passengers and crew to the nearby settlements of The Haven and Hole in the Wall (32°2′0″S 29°6′36″E), about 10 km (6.2 mi) south of Coffee Bay.

Of the 16 rescue helicopters, 13 were South African Air Force Pumas, nine of which hoisted 225 passengers off the deck of the sinking ship.

All 571 people on board were saved. Moss Hills organized the orderly evacuation of passengers by the helicopters and is generally acknowledged as the leading hero of the event.

Final Moments
The following day, at approximately 15:30 UTC+2, the Oceanos rolled over onto her side and sank by the bow, eventually striking sand 90 m (300 ft) below the surface while more than 60 m (200 ft) of her stern remained aloft a few minutes before also slipping below, coming to rest at 32.12093°S 29.12029°E on her starboard side almost at right angles to the coastline, with her bow facing seaward. The last 15 minutes of the ship's sinking was captured on video and broadcast by ABC News.

The Wreck
The Oceanos wreck lies at a depth of between 92 m (302 ft) and 97 m (318 ft), about 5 km (3.1 mi) offshore. Divers have visited the wreck site, but currents are strong and there are many sharks in the area, so diving is difficult. Photographs taken in 2002 show that the bridge section of Oceanos has collapsed.

I was on board and was

I was on board and was airlifted off the ship. The captain is a disgrace for his cowardly conduct. Ever thankful for the brave SADF pilots who carried out the greatest sea rescue in history. Not one life was lost.

Nice to refresh my memory.

Nice to refresh my memory. Really was an unusual event, so pleased that it ended well for the passengers. No loss of life or serious injury. 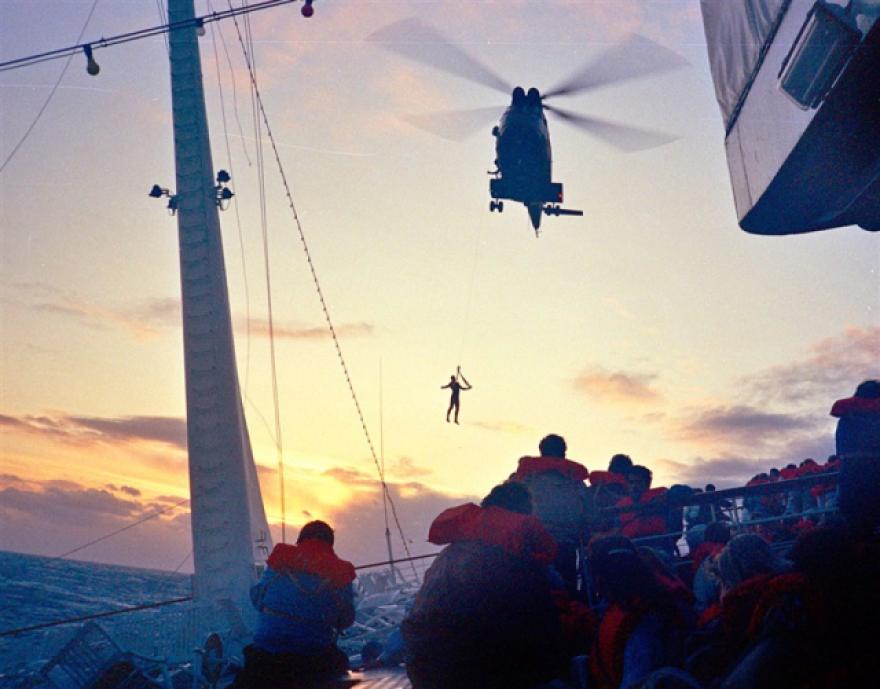 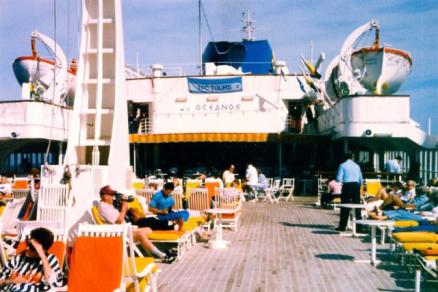 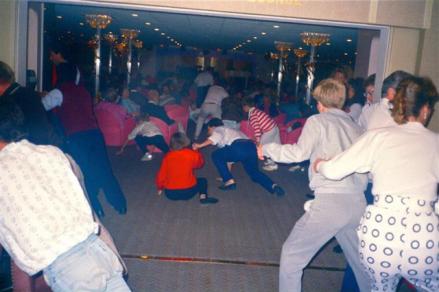 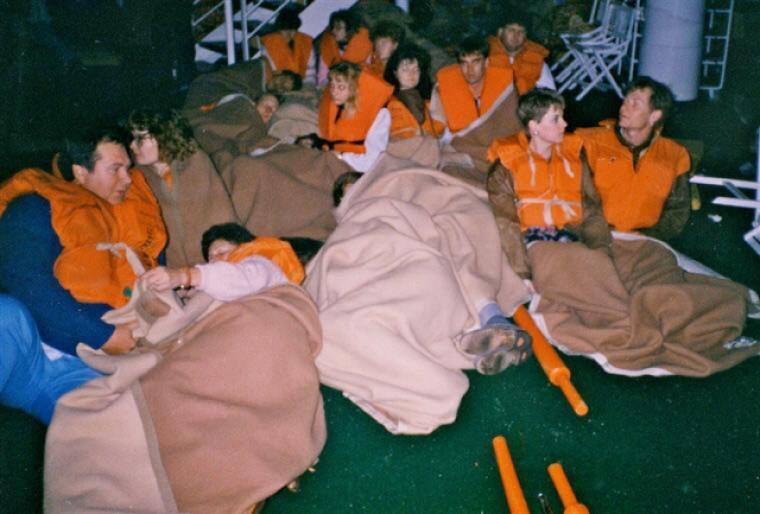 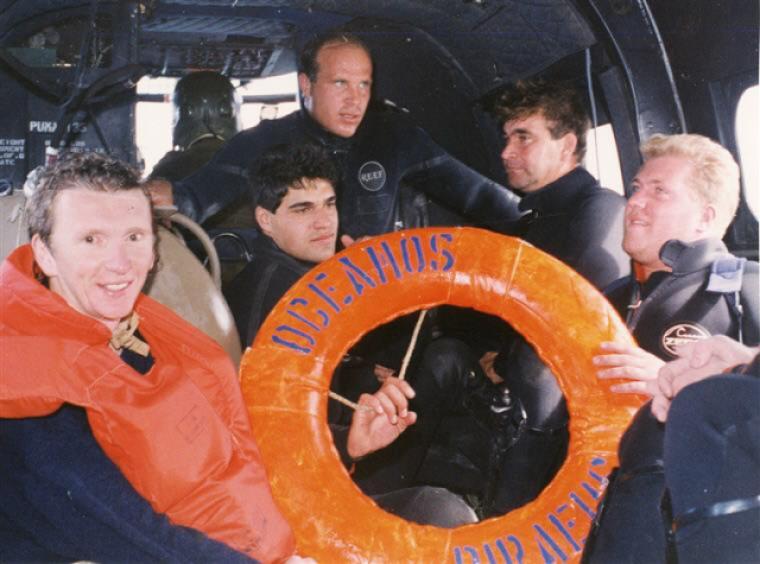