Submitted 1 year 5 months ago by WildCoast.Com.

This evening, 49 years ago (18 September 1971), tragedy struck on the Wild Coast. Eyewitnesses noticed a well-lit ship heading straight for the rocks.....the Jacaranda was running aground.... . This iconic Wild Coast shipwreck would go on to become one of the most photographed shipwrecks of all time. Not much remains today, so why not send us some photos of your time spent at this wreck, while enjoying the spectacular Wild Coast. What happened that fateful night.....?

As on most weekends, we were at our cottage at Kobonqaba, over the weekend of 18 and 19 September 1971, and coinciding with a new moon low tide, we were spearing, together with a few of the other cottage owners family’s, at one of our favourite spots,” jagged rock”, also known as “the pantry”. Those were the days of the “mail boats”, passenger ships that were owned or leased by Safmarine and did the coastal route from Durban on the East Coast of South Africa, calling in at East London, Port Elizabeth, Cape Town and then onto Southhampton, with stops along the West African coastline and the Canary Islands. This provided a means of transport between the coastal cities of South Africa as well as Europe.

The ships were always well lit up and it was a highlight of our evenings, when we were lucky enough to be at the coast on a Sunday or Tuesday evening, to watch out for the passing liners.

On the Saturday evening, 18 September, we noticed an extremely well lit up ship rounding the point at Cape Morgan and appearing to be making a bee-line for us. As time passed, we became increasingly aware that the ship was in fact headed straight for the section of coastline that we were on. A discussion was held by the adults present, and the feeling was that it was possibly a passenger ship heading for disaster on the Wild Coast.

Some of our group jumped into a bakkie and raced up to the closest telephone, at Steve Young’s trading station, ± 5 miles away to phone the police in Kentani, who then alerted rescue services from East London, Butterworth and Umtata, while some of us remained on the scene.

The ship continued to approach the coast and about 700-800 metres out suddenly lost power and turned broadside on to the swells, which pushed the vessel closer to shore. About 300m out it entered a channel with a strong current which turned the ship perpendicular to the waves and washed it up bow first against a big rock that always had fairly deep water alongside. By this time, we were on the rock with our carbide lamps and torches and we noticed movement on the deck of the ship.

managed to swim ashore without too much damage. He turned out to be the ship’s cook.

Back on the rock, we were able to secure rope ladders, that were thrown from the deck, to the rock, after which a number of the crew disembarked, but quite a few were determined to stay and spend the night on board. The crew that climbed off the ship were extremely dirty, with afro hairstyles and appeared to be of Greek nationality. All of them appeared to be under the influence of alcohol. I was sent back to our cottage with instructions to fire up the donkey boiler for hot water for the crew. The police arrived and after lengthy discussions with the crew in broken English, those that had left the ship were offered the chance of a wash to clean up, looked at each other and told my Mother “me no wash, me no wash”. My Mother replied “you no wash you no come in my house”.

At first light, I was up the rope ladders and onto the deck to have a look. I couldn’t believe the state that the ship was in. There was filth and rubbish everywhere and the smell was disgusting. Around Midday one of the big Safmarine tugs arrived, and on the high tide, cables were secured and attempts were made to pull the ship free, but in vain as the cables kept snapping. We later discovered that a rock had come through the bottom of the ship and effectively prevented it from going anywhere.

As the captain had abandoned the ship, salvage rights were claimed by a businessman from CapeTown, who was on holiday in the area at the time, and he sold the entire ship to a businessman from Umtata, who salvaged what little cargo was on board, stripped and removed what he could from the engine room, and then attempted to cut the ship up for scrap metal, but after removing a very small section of the bows, he realised that it was costing him money once it was transported to the nearest scrapyard. He then abandoned the wreck, which remained in place, fairly intact for almost 40 years. Because of its accessibility and position on the Wild Coast, it became known as the most photographed ship wreck of all time.

Over the next year or so after the ship wrecked, I was able to collect a number of mementoes of the ship, which were displayed in our cottage.

I was at boarding school when our cottage was sold, along with the mementoes. I was extremely unhappy about this, but was informed that they added to the value.

The Jacaranda was one of a number of small freighters that were known as “sugar boats”, as they were used to deliver sugar from the mills in Natal, to the coastal cities as far as Walvis Baai in what was then South West Africa. On their return, they would carry whatever cargo they could lay their hands on. She was on her way back to Durban with very little cargo on board when she came aground.

What caused the wreck? Navigational failure was one of the reasons that was put forward, along with a number of other theories. There was a lady on board, who was rumoured to have been “picked up”, by the skipper in East London, which then supposedly led to a mutiny among the crew, with the skipper and his consort being locked up in a cabin, while the crew had an almighty party. The evidence that I saw the next day, certainly supported this theory. There was even a theory that the ship was used to put insurgents ashore, although we never saw anything like that. 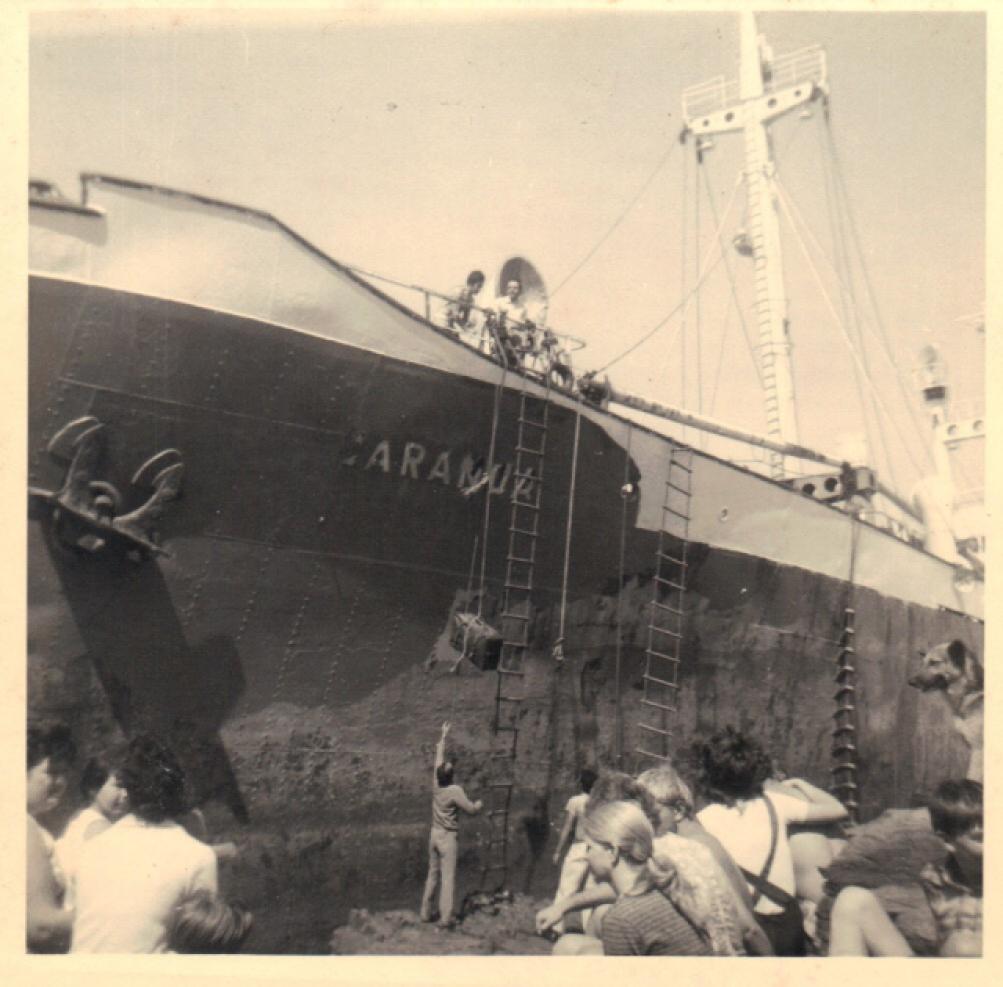 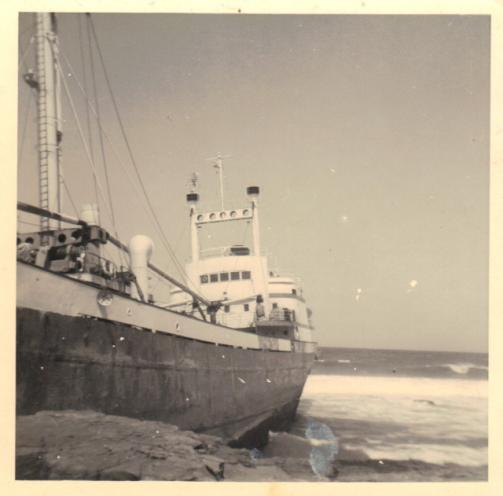 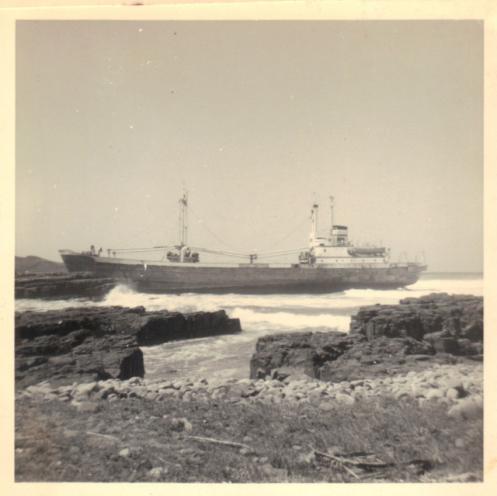 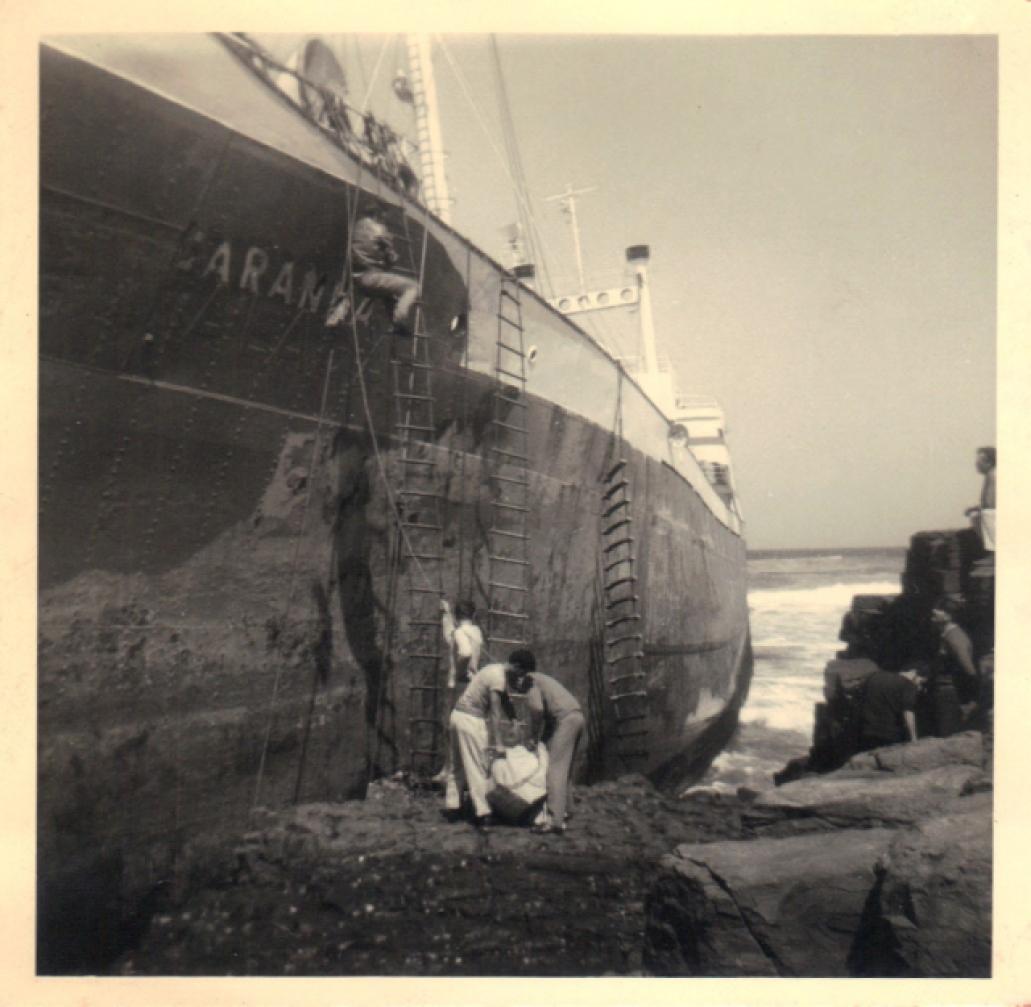