DISTRIBUTION
The East Coast rock lobster occurs from central Mozambique and Madagascar to East London. They inhabit rocky reefs in the surf zone at depths of 1-36 meters.

FEEDING
The most important prey of the East Coast rock lobster is the brown mussel <i>(Perna perna)</i>. They sever the byssus threads that hold the mussel and can crush the thin edge of the shell using their mouthparts. They also feed on limpets and will scavenge on the seabed.

GROWTH
Rock lobsters grow slowly, reaching sexual maturity after approximately 3 years when their carapace is 50-60 mm long. The legal size limit is 65 mm, to ensure that animals caught have had a chance to breed. If a rock lobster loses a leg or feeler, a new one is grown but then their overall growth is slower. It is therefore important not to damage undersize rock lobsters. Try to determine if an animal is the right size before attempting to catch it.

REPRODUCTION
Breeding occurs in summer and that is why we have a closed season from 1 November to the end of February: to protect the lobsters while they are brooding their eggs so these can hatch and replenish our stocks. Male rock lobsters place a packet of sperm on the underbelly of females. When the female is ready to lay eggs, she scratches open the packet to fertilise her eggs and then places them on the paddles (pleopods) under her tail. The eggs are tended there until they hatch. The larvae spend about five months in the currents out at sea and undergo metamorphosis 11 times before returning inshore. Larger female rock lobsters produce three times more eggs than smaller females.

FISHERY
In KwaZulu-Natal, rock lobsters may only be collected by permitted recreational harvesters. This sector collect 138 000 to 450 000 kg of rock lobster each year.

EC Rock Lobster, Crays to us locals, are being openly sold in restaurants. How can this be stopped? There is a van that cruises the northern area of Transkei, buying up ALL crays the locals can provided. Most of these are undersized. This can only lead to the devastation of the species. I dived at Mbotyi recently and size crays are almost impossible to find. We were offered crays on numerous occasions, and these were almost all undersized. While I understand that these people are starving and need every cent they can get, the commercial exploitation of this situation leaves a very bad taste in my mouth.

I appreciate your conservationist stance; but in my opinion (and if being here for 40+ years counts for anything) the crayfish are still perfectly abundant. FYI, according to the article, their preferred habitation depth is 8 - 26 meters. The shallow reefs and gulleys that they are exploited from are only the tip of the iceberg. And they renew themselves within days. Seriously. Do you remember the red tide that washed millions of them onto the west coast about 10 years ago? They were buried post-haste in landfills so that they could not impact on the lucrative, and tightly controlled, market. We need to worry more about coastal trawlers depleting our fish stocks, than the occasional hotel that still actually serves fresh cray in their restaurants. Granted, there has not been enough research into the whole issue: and this (dated) Natal article was the only thing I could find on the subject; but we need to be aware that a) stock levels have not changed in over 40 years, and b) crayfish were always a huge drawcard for tourists to the Wild Coast; up until the government declared all marine products a national resource and prohibited their (informal) resale. Apart from commercial exploiters on an un-sustainable industrial scale.) Cray are, or could be, an invaluable tourism drawcard: but our hotels can't get permits to resell them legally because of massive bureaucratic incompetence, and closed, protected, markets. Believe me: there is no shortage of the tasty little beasties. Fish, mussels and oysters, on the other hand...

While I agree that there is still an abundance of Crays on the wild coast, I cannot agree that " these replace themselves within days". These juvenile Crays have not yet reached maturity and we are therefore depleting the breeding stock by removing them before they have had a chance to reproduce. This is not sustainable. The depletion of the mussel and oyster stocks are testimony to this. The locals in this area are in DESPERATE need of income and selling their catch IS a necessity. It is a sad reality that the locals are living below the "breadline" and have no real chance of employment and will therefore try to sell anything they can get their hands on. I think that one of the ways we can all help is to refuse to buy undersized Crays, even for "bait". In this way we know that the Crays are reproducing as nature intended. I enjoy Crays as much as the next man and appreciate that the availability of Crays IS huge draw card for this area, but if we do not try to limit/stop the sale of undersized Crays, I firmly believe that this resource will go the same way as the oysters, limpets and mussels. You are very lucky to have lived in this area for so long and I too hope the abundance of Crays lasts forever.

I live on the North Coast,80km North of Durban. I have been diving for crayfish since '92, and have not seen their stocks depleted. Whilst certain areas are more exploited than others due to population, these hardy bugs seem to be doing fine in my opinion. The sea only lets you get at them once in a while, and it's hard work diving them out. The fact that they are not commercially harvested, deems good for their survival. We should be more concerned with the levels of heavy metals in our seas, after all, it is us that feeds off that.......

At 68 yrs old, and also spent most of my life on the wild coast,wot i have noticed is not the depletion of the crays, but the fact that they definitly are getting smaller. When the local women bring them 2 me to buy, i really have 2 battle 2 get one over 65mm (legal size)which tells me they will deplete the crays eventually. N ow the reason i say this is because there is a company which comes every day 2 buy the crays frm the locals, they supposedly only take the legal ones, maybe thats why we get the babies. Wot i dont understand is how could our govt. even allow them 2 get a licence, these guys have it tied up frm the kei to port edward! the complete wild coast,every day in season, and they export them.......somebody's making a hell of a lot of money! Then we have a couple of locals who have diving suits. flippers, snorkel and speargun, they go deeper and get the big fellas, they fill a cardboard box, then go to Mthatha and sell the to...???? for even bigger bucks, .......but thats not all, out of season this still continues...the crays that are in berry, well they remove the eggs, dry them then sell to the SANGOMA'S at 50 times the price of the cray.....now wot u guys think of that!!

Hi, for a start, you should

Hi, for a start, you should not be buying them, for that is against the law! I however cannot comment on the conditions in the Kei, because I live on the N coast. Nobody has a licence to sell or buy these creatures, and therefore anyone doing so, is breaking the law. As for the Sangoma's, well these ou's will trade in anything from rotten whale blubber to dead seagulls, so again, am not qualified to comment. In my area we have to dive in hard seas, often unfavourable, to get the bugs. They are still thick in my opinion, and we don't buy or sell, EVER!! Bruce Lawson DIRECTOR

Hi Bruce, wot im trying to tell people is that here on the transkei wild coast, the locals used to, and still do sell to the mlungu's when they are here for the weekend or woteva, they survive that way, but this company (i stand corrected)frm cape town, obtained licences for about 30 locals to fish and dive for them, now nobody controls the amount they catch and sell to the buyer(company), the left overs (under size)one's they try to sell to us. We have since the day "0" bought frm them, so they have cash to go and buy food frm our local shop......nothing wrong with that! The buyer must of course have a permit to carry or keep in his deep freeze the correct quota per person, per permit! With regard to the crays in berry, the point im trying to make is, ...it is highly illegal to catch crays out of season, and to remove the eggs and sell them, i feel is even worse, so yes, i stand by wot i said, the locals are depleting them, if only frm as they say...."the tip of the ice berg." Grenville Clarke Pensioner

Selling Crayfish in a restaurant ?

Hi all, i am involved in a small restaurant in Coffee Bay and would like to stock my quiet sizeable fish tank with crayfish. Creating a cool vibe and offering guests fresh on size crayfish on demand. I am looking for the legal ethical way of doing this if anyone can give me come information? Thanks j 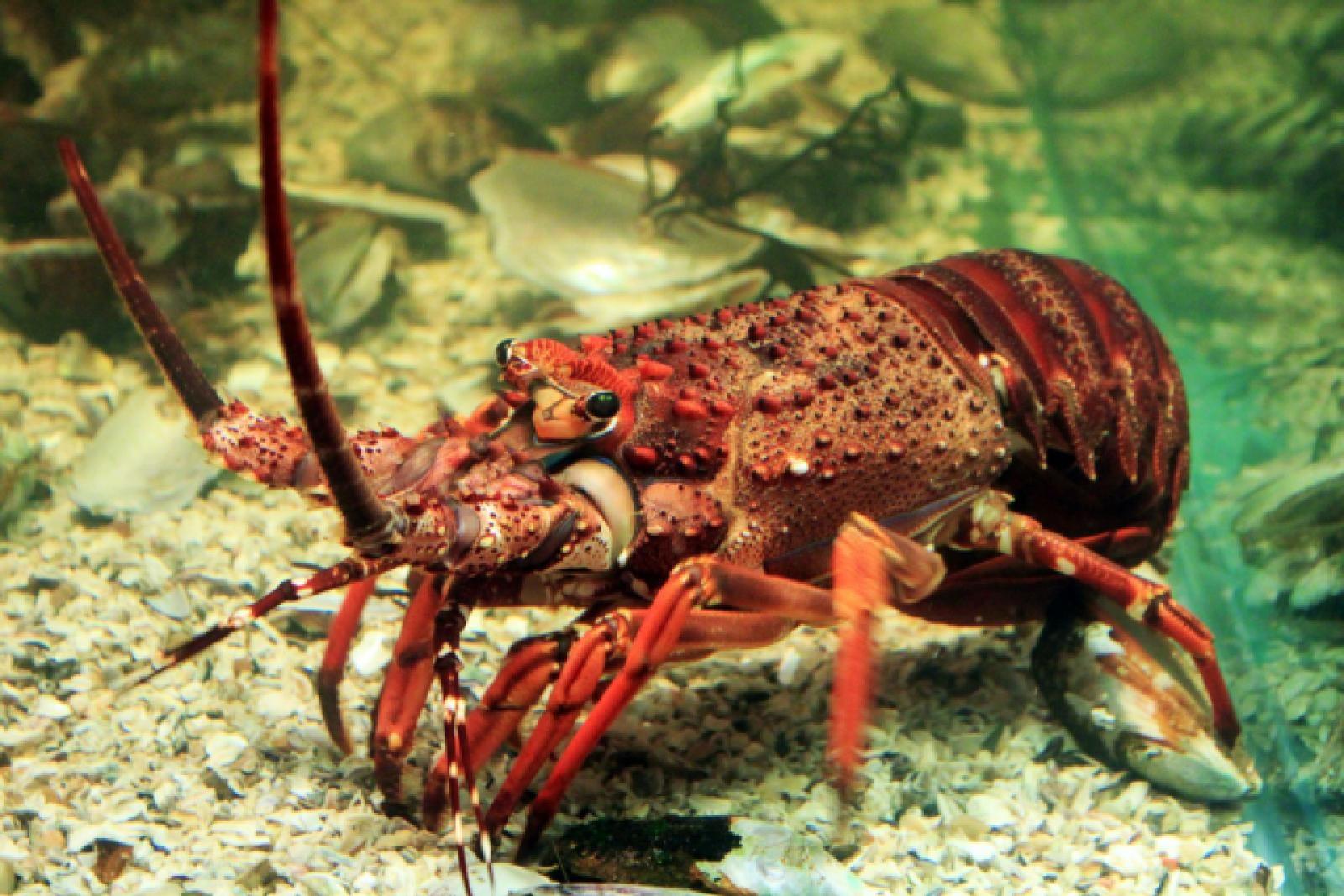