Male bottlenose dolphins live an average of between 40 and 45 years, while females can live over 50 years. Females reproduce every 3 to 6 years after they reach sexual maturity between the ages of 5 and 10.

The male bottlenose dolphin does not reach sexual maturity until between 8 and 13 years old, and he does not actually start reproducing until around 20 years old. Females lactate for around 18 months after birth, which imposes a significant metabolic burden on them, and they are the primary caregivers of their young. All the females in a group of bottlenose dolphins work together to raise their offspring.

Bottlenose dolphins (Tursiops truncatus) range in length from 8 to 12 feet and can weigh as much as 1400 pounds (635Kg). The males are larger than the females. The size of a dolphin varies with habitat. Those dolphins in warmer, shallower waters tend to have a smaller body than their cousins in cooler waters. They have a high, curved dorsal fin in the middle of the back. They have broad notched flukes, and pointed flippers. Bottlenose dolphin have between 18 and 26 pairs of sharp conical teeth on each side of the jaw. Bottlenose dolphins capture prey, sometimes as a group effort, and feed on fish, squid, and crustaceans. When a shoal of fish is found dolphins work as a team to keep the fish close together and maximize the harvest. They also search for fish alone, often bottom dwelling species. An adult may eat as much as 30 pounds each day.

Bottlenose dolphins are found worldwide in temperate and tropical waters. They are frequently seen in harbors, bays, lagoons, estuaries, and river mouths. Bottlenose dolphins live in relatively open societies. Mother and calf will bond strongly, but otherwise the dolphins will be seen with a variety of different other individuals in groups ranging from 20 in the nearshore to several hundred in the open ocean.

Dolphins are known for friendly character and curiosity towards other species and humans in the ocean, and often investigate divers. Dolphins will raise injured dolphins to the surface to help them and occasionally have rescued divers the same way. There have been reports of groups of dolphin surrounding swimmers to protect them from sharks as they swam to the shore. They have also been documented leading beached whales to deeper water channels.

Bottlenose dolphins have a gestation of 12 months and calve year round. Males reach sexual maturity at about 10 years. Females reach sexual maturity at about 5-10 years and produce one offspring every two to three years. The mother nurses the calf for 12-18 months and the calf will stay with the mother for up to 6 years learning how to feed. Sometimes, the mother will get help from another female, referred to as an auntie, in caring for offspring. Female bottlenose dolphins live for about 40 years, the males live for about 30 years. During the mating season male dolphins compete very vigorously with each other through displays of toughness and size with a series of acts such as head butting.

Dolphins employ echolocation to search for food. Echolocation is similar to sonar. They locate objects by producing sounds and listening for the echo. A pulse of clicking sounds is emitted in a focused beam in front of the dolphin. To hear the returning echo they have two small ear openings behind the eyes but most sound waves are transmitted to the inner ear through the lower jaw. As the object of interest is approached the echo grows louder, and the dolphins adjust by decreasing the intensity of the emitted sounds. Bottlenose dolphin have good eyesight, and their eyes are equipped with a reflecting membrane which helps them see in low light. They have a poor sense of smell.

Dolphins communicate with one another through squeaks, whistles, and body language. Examples of body language include leaping out of the water, snapping jaws, slapping tails on the surface of the water, and butting heads with one another. These behaviors help keep track of other dolphins in the group and alert other dolphins to possible dangers and nearby food. They produce the sounds from air sacs near their blow hole and each dolphin has a unique signature whistle, as well as other communication sounds that are common to all in the group.

The Bottlenose dolphin has a single blowhole on the dorsal surface of the head. The blowhole can be closed by use of a muscular flap. A dolphin is able to exchange 80% or more of its lung air with each breath, and typically rises to the surface to breathe through its blowhole two times a minute. However, they can, if necessary, remain underwater for up to 20 minutes. Dolphins sleep for approximately 8 hours in every 24, in periods of from several minutes to several hours. During the sleeping cycle dolphins remain near the surface swimming slowly, occasionally closing one eye, and one brain hemisphere remains active while the other hemisphere shuts down. 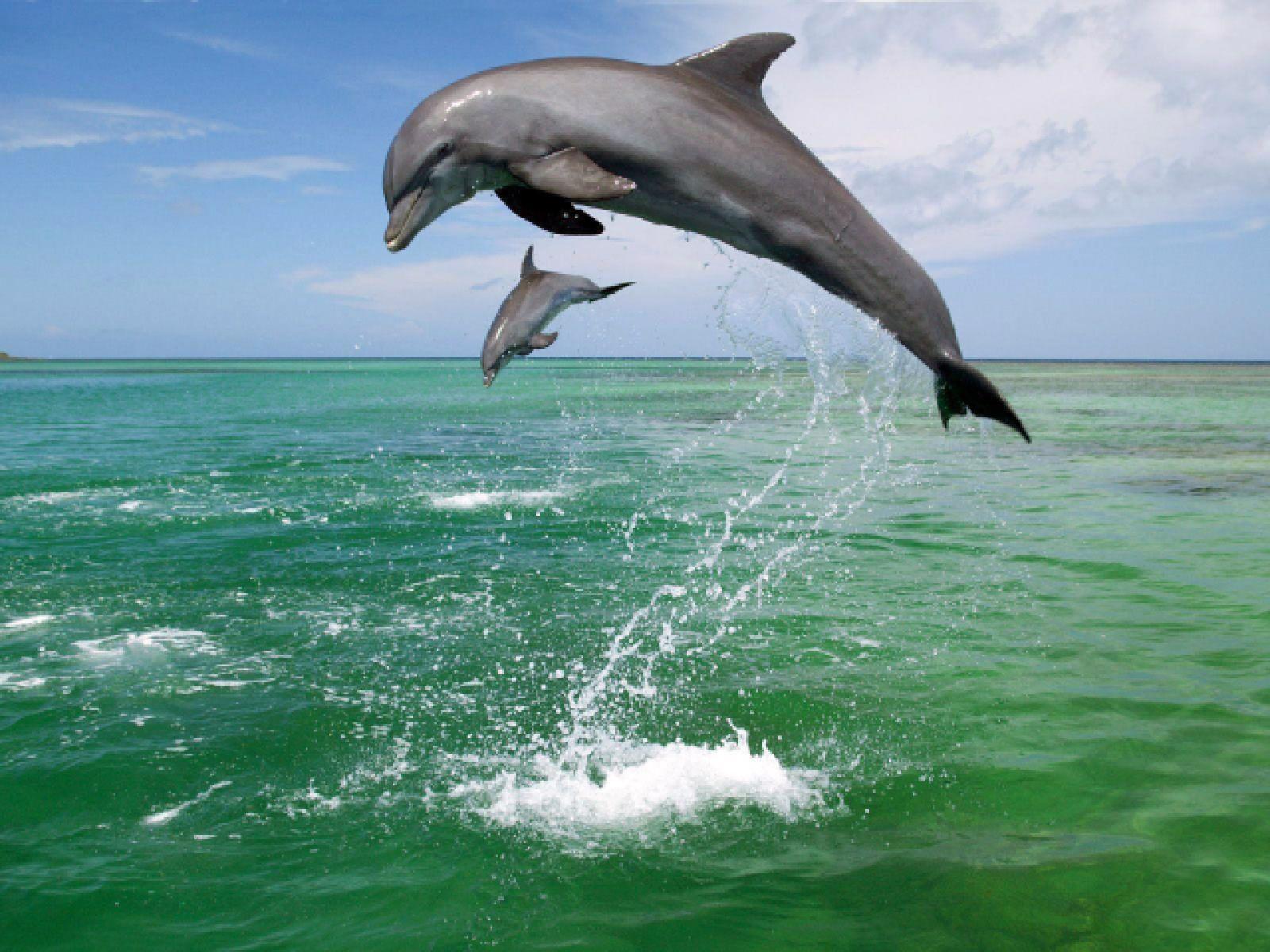 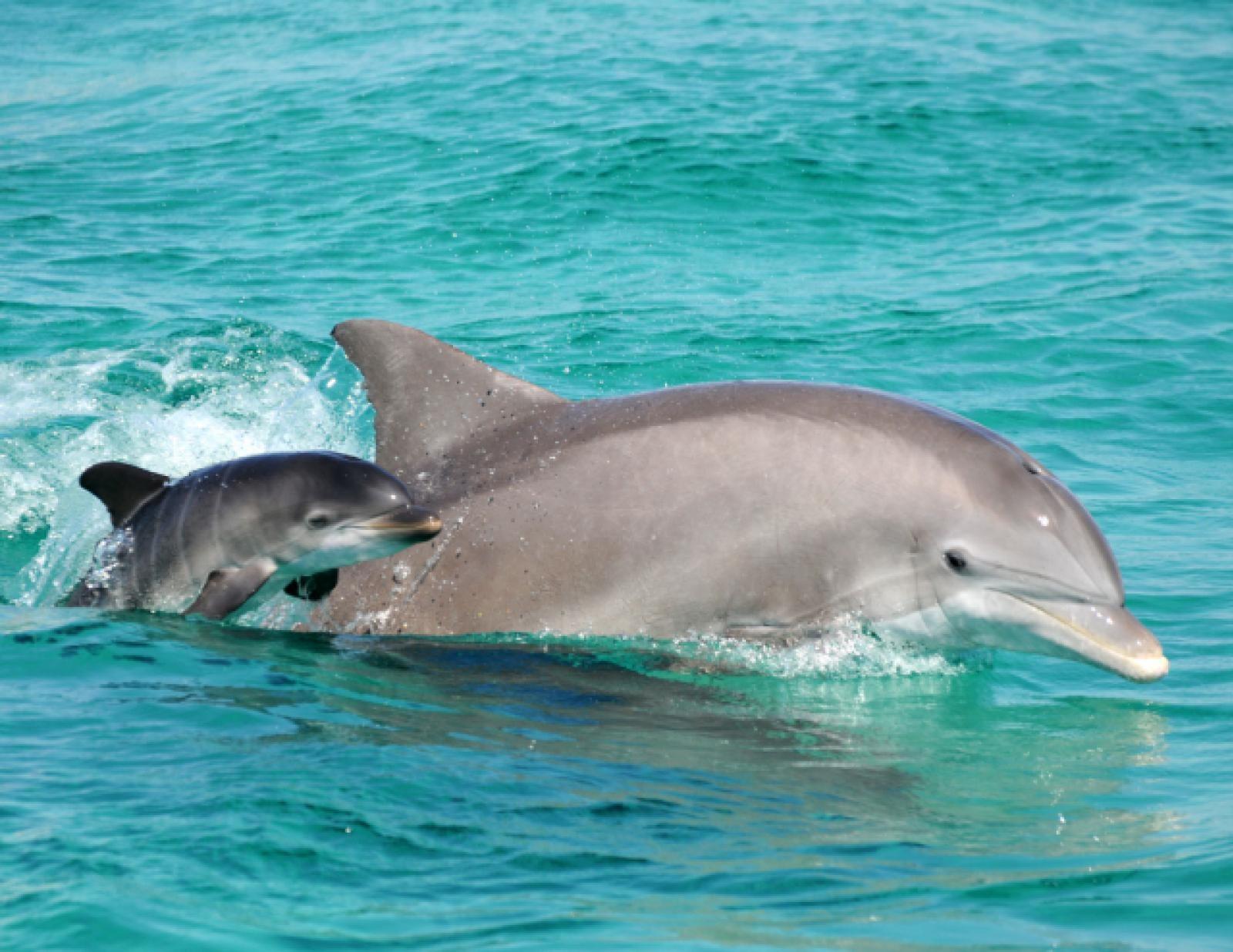 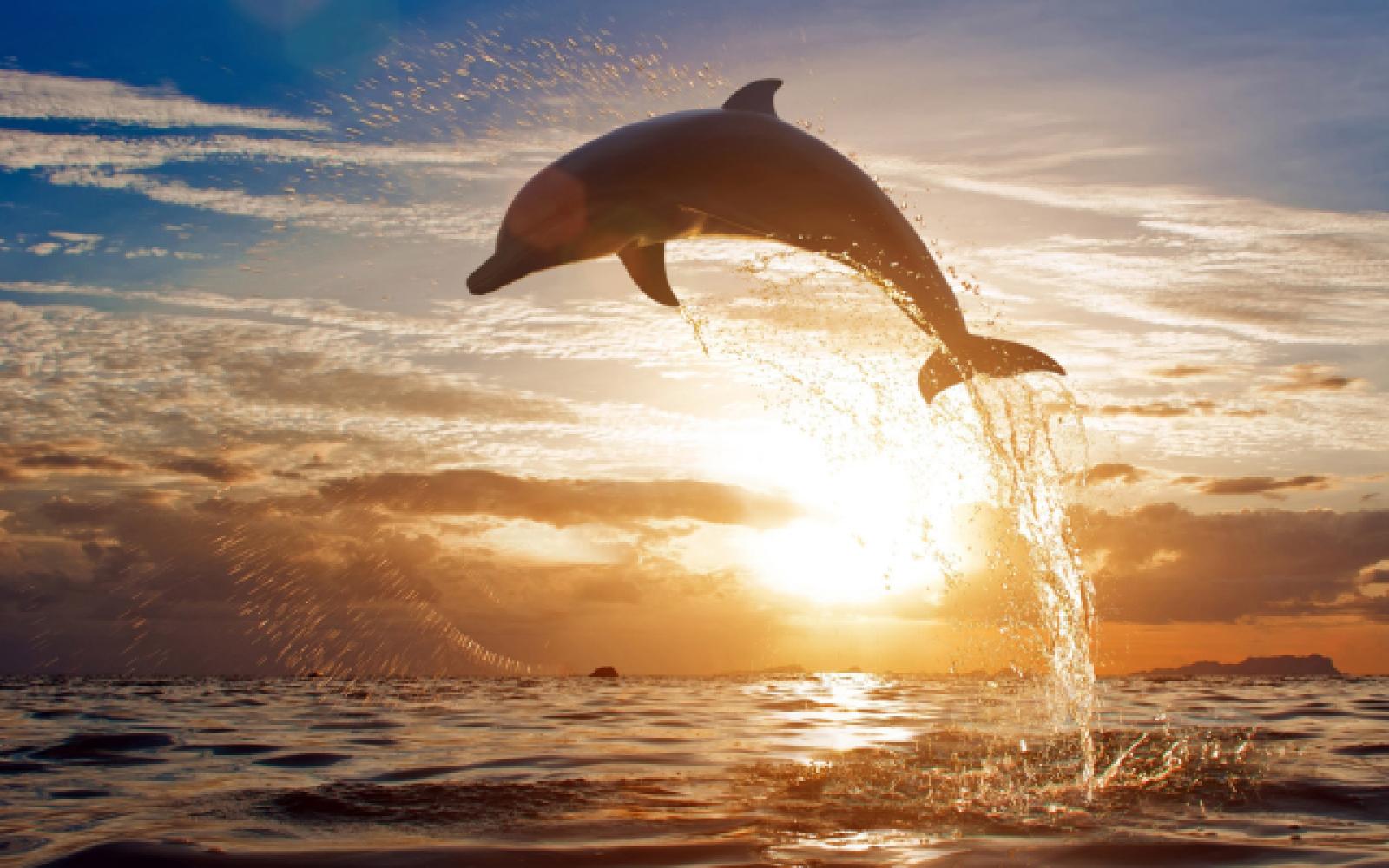 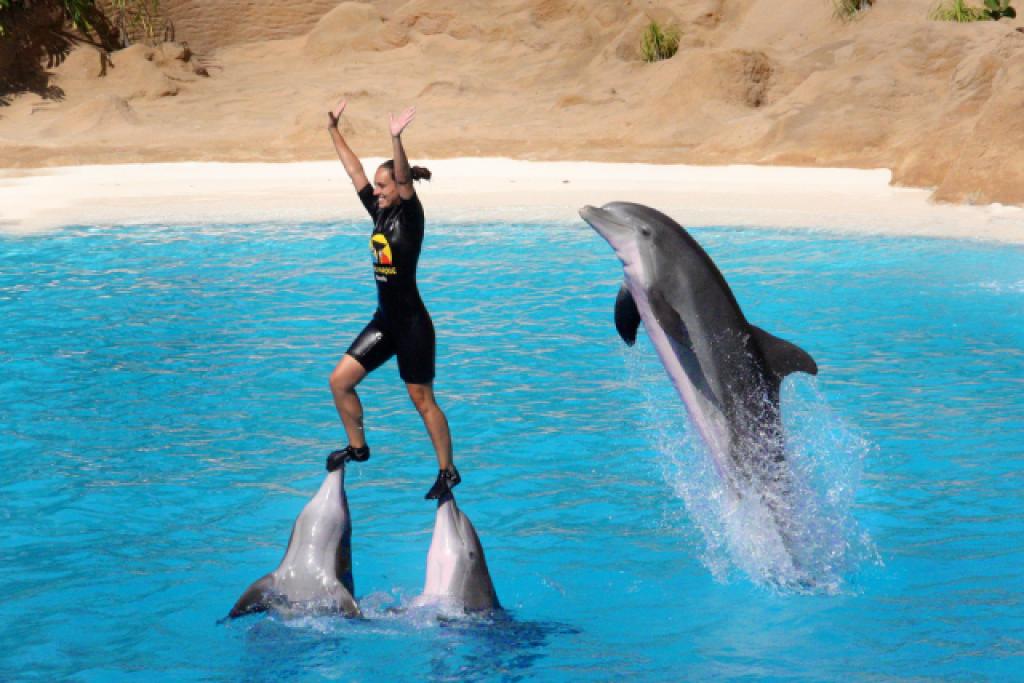 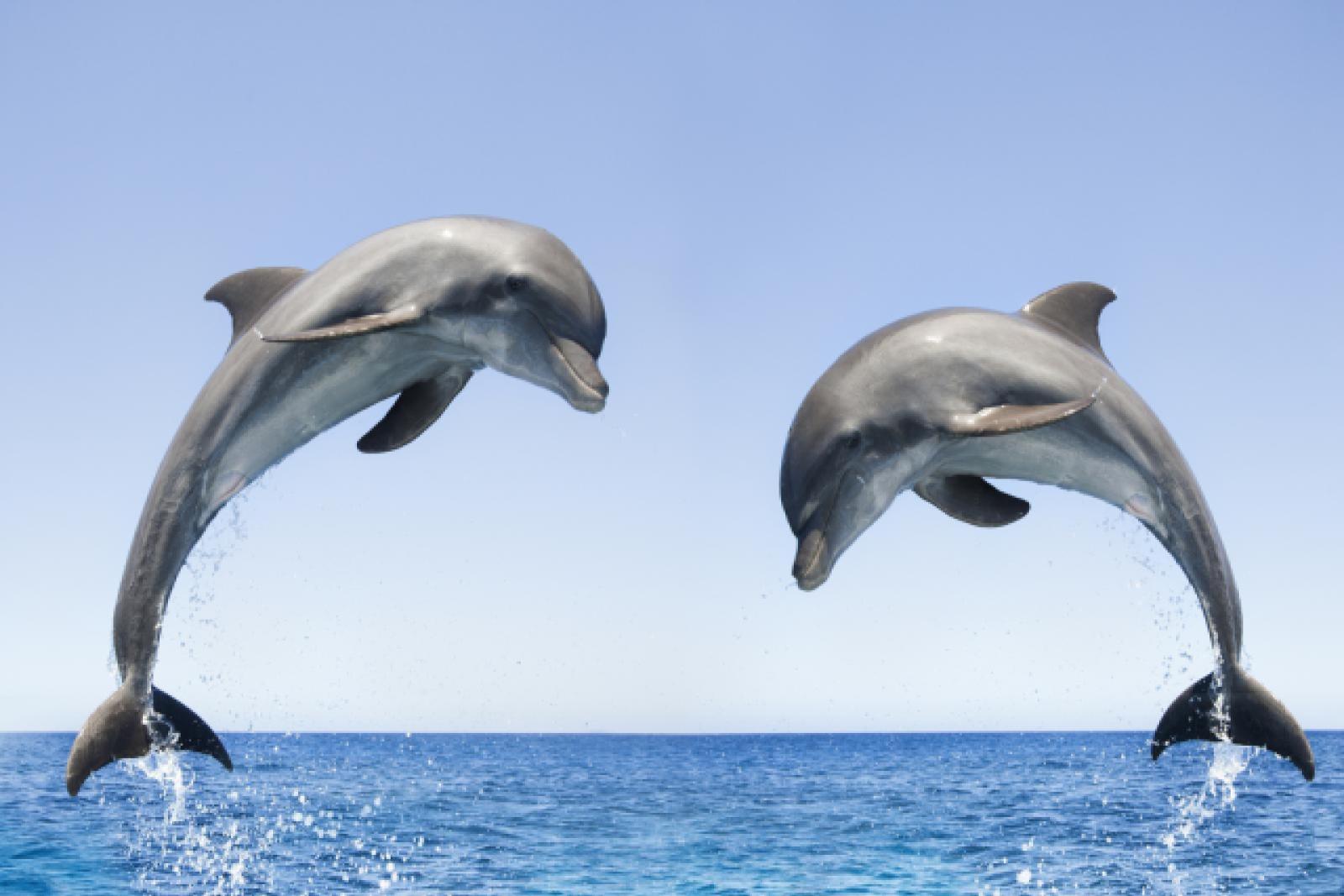